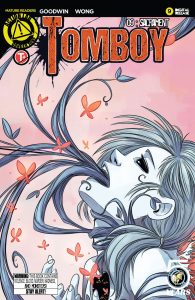 It has been three months since the last issue and this issue was well worth the wait. In the series,  Goodwin introduces Addison as a traumatised young girl, who gains supernatural powers and she slowly reveals the nature and origins of Addison’s powers. This is the issue that explains it all. This is not something I want to spoil in any way, but all I will say is that I am now going to go back through the issues looking for flowers and it is a true game-changer of an issue.

Also in this issue, Goodwin elaborates on Detective Autry’s backstory, which she writes well, but it is Wong’s art and colours, especially during the panels set in the past, that make this section a good read. The best part of this issue is the reveal of Addison’s powers origins. In this series, Wong has maintained and improved on Goodwin’s great anime-like style of art, which is a bright and vivid contrast to the violence that occurs.

This issue even addresses the slight problems I had with the first issue of this series, that Addison  found out about a character’s death and finding the killers was too convenient. Goodwin has crafted a beautifully intricate  and layered world, peopled with compelling characters that is a delight to discover.

Catch up or BUY. Look if there is there is one book to catch up on from 2016, this is that book –  you need to read it. Tomboy is a supernatural crime thriller that has twists and turns, but Goodwin knows how to balance the dark with levity and how to write a satisfyingly slow reveal. Get if you like a good, slow burn of a comic.