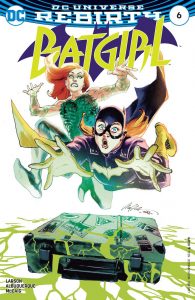 Following a successful first arc, new Batgirl writer Hope Larson is taking Barbara Gordon back to Burnside. That is, if Babs can survive the plane ride back with a killer plant onboard! Batgirl #6 might be branded as an “epilogue” chapter to the previous five issues but it’s less an endcap and more of a transition between stories. This means it’s an optimal time for readers that took the “wait and see” approach to Batgirl’s Rebirth relaunch to hop aboard (pun intended) while offering up another fun and energetic ride to those that have already been enjoying what Larson has been doing. Really, you can’t go wrong with this issue.

Much of what makes this one-and-done so much fun is Larson’s continued grasp on the Barbara Gordon character. She’s a spunky go-getter that can deduce her way out of any scenario, even when she’s literally trapped in mid-air with a deadly breed of plant and has no means of escape. How she solves this particular threat just further speaks to her intelligence, which Larson has imbued in the character since the start. Of course, it certainly doesn’t hurt that this issue features a Poison Ivy team-up/quarrel as well, and the way the two characters play off one another makes me certainly want to see Ivy reappear in the series again down the line.

As with the other five issues of the series, Rafael Albuquerque’s frantic linework adds that perfect amount of energy to the book. His art is particular useful here where every second feels like a race against the clock, so we get a real sense of Barbara with her back against the wall as she has to figure out what to do. But Albuquerque’s less detailed panels, particularly the lack of any sort of background in most of them, does hurt a bit as the book carries on and Batgirl moves throughout her limited locale. It’s difficult to tell where she and Ivy (and the plant) are on the plane at any point in the story, which can be more than a little disorienting.

Buy! Batgirl’s Rebirth has been a successful one so far and this issue is yet another example of why that is. Although this chapter isn’t a particularly necessary one, it is a joy to read and does set up the next story arc to come as Barbara heads back to Burnside. If you’re looking for a fun one-and-done issue you’ll want to pick this one up.