There are a lot of shows and comics coming out and it is sometimes hard to find things you can recommend for kids, these are some of the releases in 2016 that I think are great for kids.

This has only recently started airing, but it is already one of the best superhero cartoons in years. Justice League Action is essentially an eleven minute Justice League Saturday morning cartoon. Whilst most episodes are not deep character studies as Justice League or Justice League Unlimited, it captures the characters’ personality even in the smaller cameos that occur and balances the humour and serious moments. There are characters from all corners of the DC universe- I mean, you have people as obscure as the telepathic space worm Mr Mind ranging to Etrigan the Demon. These additions never feel overly forced and of course the action is great. This show is a must watch for kids and people who just want to watch a fun, well made comic cartoon.

Look, I know most of you have probably already heard or read some of Squirrel Girl, but this comic is perfect for kids and it has had a good 2016. Ryan North and Erica Henderson have created a fantastic, all age comic. My sister (a 13 year old
girl who does not care much for comics) loves reading Squirrel Girl and pouring back over the pages to read the comments on the comic at the bottom of the page and the gags throughout. This quirky comic has plenty of action, but most importantly a great sense of humour that kids will love and Henderson’s art is a delight.

DC Superhero Girls is, as you might have guessed, about the heroines of the DC universe. Set at Super Hero High with Amanda Waller as the principle, it’s as fun as that sounds. The cartoon on YouTube has two seasons of three or four minute videos, but the main characters of Wonder Woman, Harley Quinn and company are all given  meaningful character interactions that build upon one another. This series is a great introduction to the ladies of DC and to superheroes with a fun, inviting and colourful adaptations to both mediums. 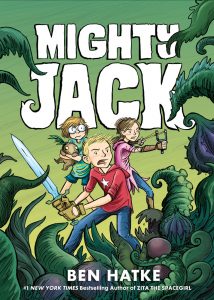 This book is a great all ages adventure that is a modern retelling of Jack and the Giant Beanstalk. Jack must look after his autistic sister in the summer whilst his single mum works two jobs. This book delves into the obvious issues that arise from the situation portrayed, but does so poignantly from a kid’s perspective and at no point does it fully take away from the sense of adventure evoked in the book. The colours by Alex Campbell and Hilary Sycamore pair brilliantly with Hatke’s art, bringing the oddities to life. The story goes at a fast pace, but this will only leave kids and you wanting to read the next installment in the series.

First off, if you have not been reading Deanna’s reviews of Supergirl on the site, you need to do that. If you have not been watching Supergirl,  you and any kids you know need to watch this show and get caught up before it comes back from its midseason break. Season two has built upon the first season beautifully and Supergirl handles delicate subjects with such care that this show should be watched simply for the positive message it puts out. The show balances multiple storylines, with aliens attacking and the CW drama occurring at the same time but never becoming overdone or tired. If kids could watch only one live action superhero show, this is the one they should be watching coming 2017.