“We’re all gonna die because of you.”

*Spoilers from previous issues ahead*

2016 has no shortage of new, dystopian comic series.  Warlords of Appalachia stands out because of its narrow 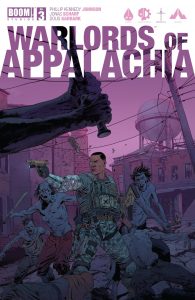 scope, and — so far — limited use of its protagonist.

In issue two, U.S. troops massacred unarmed Kentuckians in a FUBAR situation, and that’s the primary reason for readership to care about the outcome of the ongoing conflict.  It appears that Phillip Kennedy Johnson (Killing Marcus, Last Sons of America) is drawing out phantoms from dark pages in America’s history, where soldiers committed atrocities against unarmed civilians from western expansion to the Vietnam War and beyond.  However, given historical context about secessionist South and the reflexive reaction to view one’s own government as a noble and rational actor, Warlords of Appalachia is fighting an uphill battle to get readership to sympathize with Kentucky’s fictional 2041 rebellion.  We also don’t quite know what Kentucky did to illicit military attention from the rest of the country.  Between those loose ends and a reserved protagonist who doesn’t earn much limelight, it’s difficult to emotionally invest in Kentucky’s rebellion.

However, the lack of charisma and the moral ambiguity of the conflict doesn’t cement Johnson’s work as a flop.  Far from it, in fact: Warlords of Appalachia #3 is a witches brew of historical reflection, distrust of government, sci-fi action and growing religious fever-pitch.  The action sequences are entertaining and engaging, and there’s a tenseness running through the entire issue.  Be warned: Johnson delivers one of the more cringe-worthy interrogation scenes that you’ll ever come across in a comic book.

Johnson’s writing is the heart of Warlords of Appalachia, but the creative team is no slouch.  Combat scenes are tense, and you can feel the emotion jumping off of the page.  Purple and gold colors deliver a great dusk hue in the midst of combat.  Muted colors throughout match the story’s tone.  Yet, calling the artwork ‘special’ would be a stretch.  There isn’t a lot of detail, particularly with backgrounds and landscapes.  It’s plenty good, but it’s just not great.

Verdict: Check it out.  Warlords of Appalachia is turning into one of the more intriguing new series as 2016 wanes.  There are loose ends, and issue three doesn’t tie them, but that should make readership merely hungry for more.  The art, while not exactly rich and vivid, justly compliments the story.  If you’re craving near-future dystopian Americana with your comics, look no further.