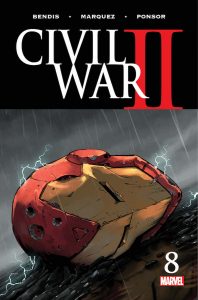 The wait is over. Just as we ready ourselves to put a bow on 2016 Marvel has finally wrapped up their Epic Event of 2016 with the release of Civil War II #8. I entered this event with an open mind. I wanted to like the story as much as I loved the art but as I sat down and read this issue all I could think was ‘dumpster fire’. Unfortunately Civil War II #8 is an unsatisfying conclusion to what could have been a promising event. There are so many problems with this book I don’t even know where to begin.

First and foremost the bulk of this issue is Captain Marvel and Iron Man in a no holds bar fight in the sky above the US Capitol. We’ve been building to this conflict since Civil War II began back with Free Comic Book Day in May. Just as their motives throughout this series has felt forced so does this fight. They both are bound and determined to beat the piss out of the other to save the future while they do wholesale damage to our nation’s capitol and put the lives of thousands in harm’s way. Miles Morales and Steve Rogers are on scene as well but Miles is contained in a protective shield engineered by Tony to protect him while Steve is grounded and this fight is an airborne event. Intermingled with the fight are the Inhumans arrival at the Capitol along with the Ultimates and Alpha Flight as everyone but Carol has been informed that Ulysses visions have become unreliable. Of course they’re to late as Carol provides a finishing blow. But in typical Marvel fashion as the final blow is delivered all those present are pulled into a shared vision of possible futures. Marvel brings in a plethora of guest artists to then give us seven possible futures that Marvel may get around to someday. At the end of the vision we learn that Ulysses has evolved and melds with the Universe as Eternity offers him the chance to be more then human and inhuman. The book wraps up after as we see Tony in an iron lung of his own design, so he is off the table but not dead. Obviously he’s off the table for a time but he’ll be back by the next Avengers movie. Carol is an American hero and given the keys to castle by the President to protect the nation.

At the end of it all Civil War II is a hot mess and this book just exemplified the problems. There were many problems present in this title as a whole but for the most part I could look past them but as this book ground to a conclusion I’m not even sure that Marvel is aware of what is going on in their titles. If you’ve been reading the Ultimates you know that Eternity is in chains and there is a large antagonist at work when it comes to the multiple iterations of the Marvel universe. It’s one of the continuing plot threads for that book but it’s ignored here. The entire reason this event happened was because of Ulysses, then he’s just written out of existence. All that worry over Miles killing Captain America seems benign since Tony and Carol blow him up during their fight. Don’t worry, FRIDAY tells us he’s okay. The worry that the delay and relaunched books were going to spoil the ending of this book was pointless since we knew how this book was ending since day one, with Tony gone. Even if they killed him we know he’d be back but to just put him in a coma to come back when needed is a copout. At the end of this book nothing is changed. Even the Beast tells us that Tony wasn’t worried about Carol using Ulysses, it’s who would come next that concerned him. Then why didn’t Tony just talk to Carol? I’d like to say that was some meta-commentary on our past election but with the delays we know that isn’t true, it’s just poor story telling. I like Bendis, I really do. His Ultimate Spider-Man up to today’s Spider-Man may be one of the grandest runs ever by a creator and it is brilliant. I enjoyed his time on New Avengers and Siege is one of my favorite Marvel events of the past decade but Civil War II is him at his worst. This book feels mandated to tie in to Captain America: Civil War and Bendis being the ultimate company man took the hit for the team with no regard for continuity or historical characterization of his principle players. The one shining point at the end of this fiasco is David Marquez. Marquez is a star in the making as his work is so clean and vibrant. I look forward to his next title at Marvel, as long as it’s not Civil War III.

Verdict: Pass! Run away as fast as you can. Find Marvel books worth spending your hard earned money on. Books like the before mentioned Ultimates is well worth your dime. Give Moon Girl & Devil Dinosaur a chance. We are evented out at this point and Marvel should know better by now not to link their relaunches or All New All New All New Marvel Now Now to a mini-series that is destined to be late and not even matter in the grand scheme of things. Seek out better books as Civil War II will only disappoint.