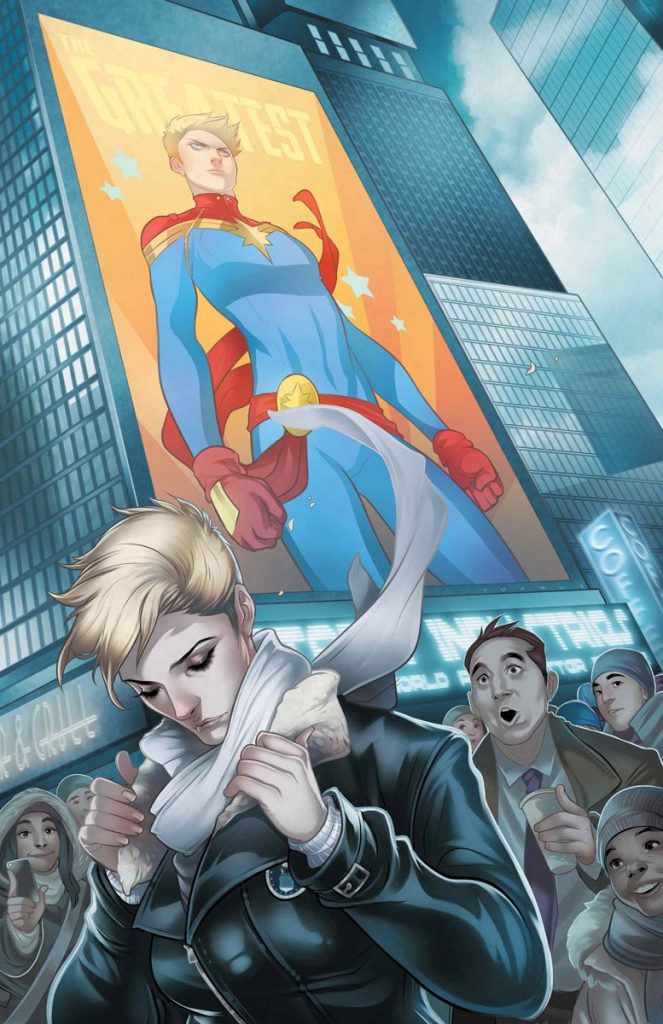 At the same time, I am probably the best and worst person to be reviewing

The Mighty Captain Marvel #0, as I’ve been a fan of the various super-heroic alter-egos of Carol Danvers since the launch of the original Ms. Marvel back in 1977 (not to forget to mention her 1968 “civilian” debut in Marvel Super Heroes #12!), and so whilst that affords me a depth of personal history with the character, it also tends to make me very protective of what she has come to represent for so many people, particularly since her relaunch as Captain Marvel by Kelly Sue DeConnick in 2012.

Briefly, that re-imagining by Ms. DeConnick, Jamie McKelvie, and Dexter Soy brought Carol Danvers all the way back from perhaps the most heinous multiple “fridge-ings” ever perpetrated upon a comic book super-hero (especially the odious events of Avengers #200!), adding to the firmament a new star, one that shone so brightly through her actions, attitude, and ability to overcome adversity that Captain Marvel became an inspirational figure to readers old and new, and I believe Ms. DeConnick’s run to be the starting point for much of the positive change in terms of diversity and proper representation of female characters that we are seeing today.

In the wake of the last Secret Wars event Ms. DeConnick left the title,

and Captain Marvel has passed through a few creative teams since, with none truly capturing the special nature of what had come before. Additionally, with Carol Danvers at the epicenter of the divide that causes “Civil War II”, she has been thrust into a new position of prominence within the Marvel Universe, but one that to my mind has shifted the character in such a way as to be untrue to the core values that created the deep affection amongst readers for “Earth’s Mightiest Hero”.  With all this baggage in tow, how does new writer Margaret Stohl fare at navigating this re-christened Mighty Captain Marvel through what have been some choppy waters of late?

Ms. Stohl is the acclaimed author of the novel “Beautiful Creatures” and its follow-ups in the “Caster Chronicles” series, but most germane to Captain Marvel, she has penned two YA novels featuring the Black Widow, “Forever Red” and “Red Vengeance”, and it seems based on this first issue that her expertise at crafting layered characterizations that must sustain over the long haul could serve her in good stead here. 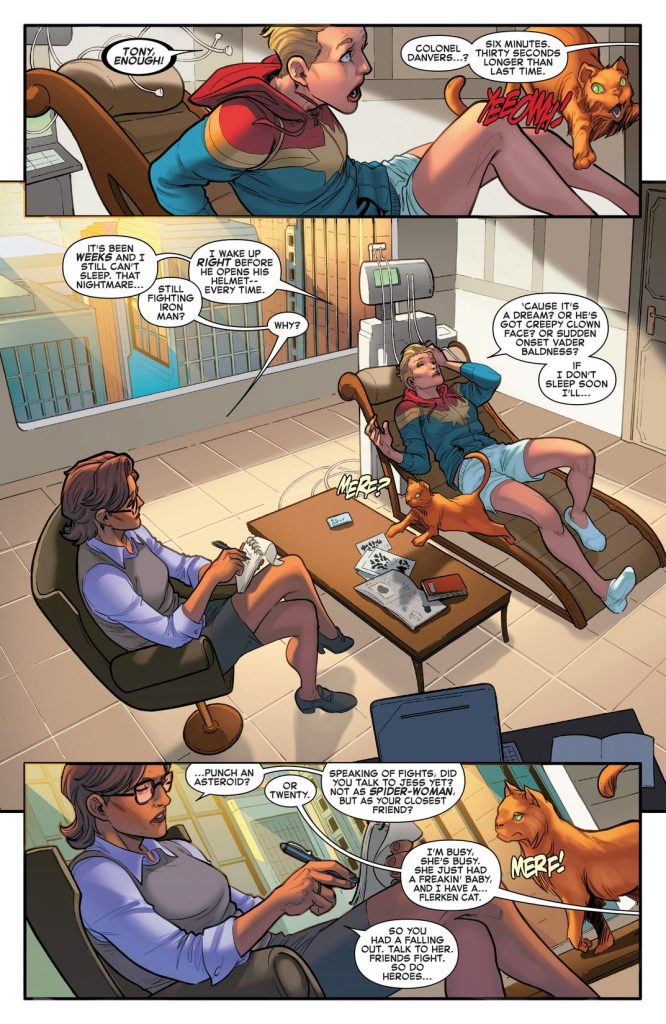 The story begins in the aftermath of Civil War II (I’ll be spoiler-free, so no worries!), and Carol is juggling a raft of conflicting emotions regarding that mishegos, and her internal struggles are manifesting themselves as nightmares that are causing many sleepless nights. All the while, she is still the Commander of Alpha Flight, charged with being Earth’s last line of defense against alien threats, one of which might be headed for their front door, so she must remain that confident leader, even if she isn’t as self-assured as she once was.

If Ms. Stohl doesn’t entirely stick the landing with the final pages here, which although emotional might be a smidgen on the pat side, she presents us with a Captain Marvel who is eminently more relatable both to readers and to her previous incarnation, as she seems once again a woman trying with every fiber to begin the process of reconciling the many roles that Carol Danvers needs to play. She’s once again a thoughtful, caring person, and her wry sense of humour is back, too, imbuing even tense action scenes with a lovely feeling of deja vu, as do the many call-backs to both Ms. DeConnick’s run (Chewie!!), and even Chris Claremont’s and Gerry Conway’s from the original Ms. Marvel days!

I’ve slighted the artists a bit with my focus on Ms. Stohl’s writing, but let me say that is nicely done by all concerned. The work here by Emilio Laiso, Ramon Rosanas, and Rachelle Rosenberg is engaging & expressive, with uncluttered but interesting layouts that don’t distract from the more personal aspects, and still deliver on the action when needs arise, complimenting the dual nature of the words that accompany it.

All-in-all, a fine first step by the new creative team, and I’m hopeful that Captain Marvel has found her footing once again! We’ve once again glimpsed the heart of a character who so engaged readers that they formed the “Carol Corps”, and so here’s hoping that in future issues, that not only continues, but expands, perhaps to include some of her old supporting cast back in NYC.

VERDICT: Buy! It’s very early, but it seems as if Margaret Stohl and her team might just be able to remove Carol Danvers from the “punch first, think and feel later” pigeon-hole that she has been placed in throughout this latest event. There’s a long way to travel to return her to the heights to which she once soared, but I’m cautiously optimistic that we’re seeing the first small flights!

Just because: While writing this review, I came across this image of Captain Marvel by Stjepan Sejic, who along with his wife Linda will be guests on an upcoming Talking Comics show! 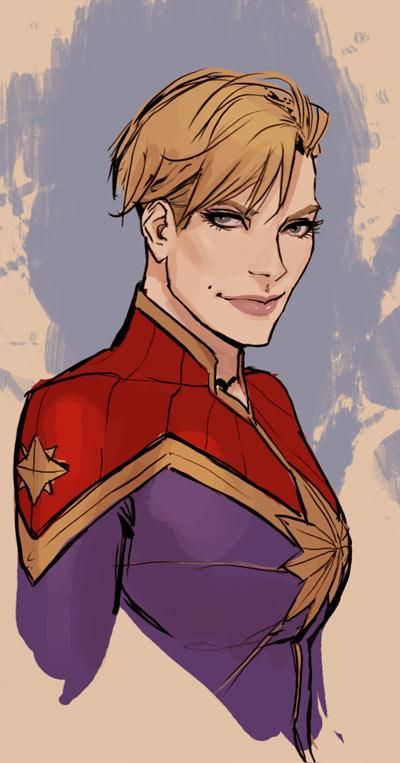