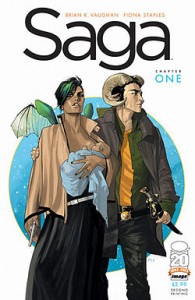 The nominations keep rolling along!!! The Talking Comics crew continues to talk the very best of the best in the world of comic-dom in 2016!!! This episode, things get heated as the gang discusses and debates creators and comics in the following categories:

Also, the crew announces one more inductee for this Spring’s TALKING COMICS HALL OF FAME induction: SAGA by Brian K. Vaughan and Fiona Staples!!! Tune in to learn more!!!