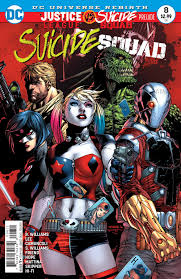 Colours by Jeremiah Skipper and HI-FI

First off, I have not been caught up with Suicide Squad rebirth and, as I suspect many who pick this issue up, I did so because it claimed to be the prelude to Rebirth’s first big crossover event. I think Williams knew this as, whilst the first half of this issue is the ‘Black Vault’ arc conclusion, it is fairly easy to pick up what’s going on, even if it is ridiculous at times, especially if you have seen the Suicide Squad movie.

Suicide squad in its essence is meant to be a wacky comic filled with bad guys where anything should be able to happen.  Williams nails this in the issue, with Harley Quinn sane whilst everyone but Flag and Waller have gone crazy and violent, well, more than usual anyway. Captain Boomerang comes back just in time for the crossover, with all the colourful and idiotic statements you should expect from a walking talking Australian stereotype. There are some issues, such as the defeat and fight with Zod feeling rushed, but that is the result of having half the number of pages to tell the story. However, the characters never feel out of place and are true to who they are in this comic.

The art in the first half (done by Jim Lee) is exactly what you would come to expect from him and meets the standards he has set. At times, the inking or shading is a bit heavy, but that is a minor picky complaint.

Now for the ‘Prelude’ or, as it should have been called DC proudly presents Killer Frost joining Task Force X, since it is essentially an introduction to Killer Frost. Williams writes Killer Frost’s inner monologue while she is being shown around Belle Reve really well and endears her to the readers, which is needed to make people actually want to read her in Justice League of America in February. Williams sets up Frosts internal conflict and bravado where she is terrified of the situation she is in, but on the outside keeping calm. The rest of the prelude is just reintroducing the Suicide Squad to people through Frost with the standard exposition, with Frost apparently taking a shine, to El Diablo, ironically.  Nothing is particularly wrong with reintroducing the team, but the prelude is not necessarily needed apart from partially informing Killer Frost’s mind set.

Camuncoli and Mattina’s art in the Prelude does a great job of showing how Frost sees peoples heat signature, with Frost even commenting that Deadshot’s heart is cold. In what is basically Frost walking down a non-descript corridor of cells, the art brings emotion to the comic especially Frost’s hidden fear and the cold breath looks weirdly great.

At the end of the issue you have the seven real villains of the upcoming crossover and who in the Justice League they are supposed to be going up against. Straight away I recognised only about two or three of them – it seems Williamson is doing some deep pulls for villains.

Passable.  This comic is fine, the art is good and the characters are interesting, but it is not a must buy unless you know you love the Suicide Squad dynamic. The prelude is not going to be necessary to enjoy the crossover event especially if you already know the characters. This issue is really designed for new readers and, in that vein, it really works.