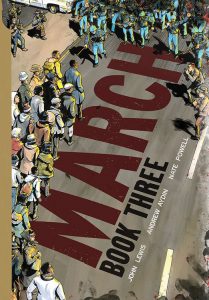 It’s that time of year again!!! The crew has gathered in the hallowed halls of Talking Comics to talk the very best of the best in the world of comic-dom in 2016!!! This episode, the gang discusses and nominates creators and comics in the following categories:

Also, the crew introduces the TALKING COMICS HALL OF FAME, a new concept designed to celebrate and honor those comics works that deserve even more recognition for continued excellence and cultural impact. The first inductee? This year’s Special Achievement in Comics recipient, MARCH by Congressman John Lewis, Andrew Aydin, and Nate Powell. Tune in to learn more!!!