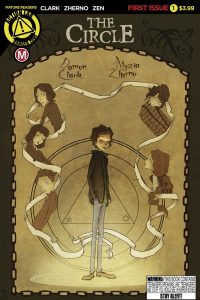 You have heard this tale probably more times than you can count –  a kid moves into a new town, gets b
ullied and then makes friends with the outsiders. This issue uses all those clichés and is clearly a set up first issue, but Clark makes the clichés charming, instead of what could have easily been quite grating.

The layout of the issue makes each frame look like every panel is like a photo in a scrap book, creating this idea that every event is important . This means that the pages that are not framed like photos really stand out, like the last page showing the kid (Christian) embraced by his new friends in their mine hideout. This is endearing but you know it can’t last. Zherno’s brilliant use of colour makes the art and the comic enjoyable to read even if, at times, the faces look like a mix between a china doll and some creation of Dr Seuss.

Damon Clark uses this issue as an establishing one, before we delve into the occult that is solicited in this series. Clark does a decent job setting up the town of Shell Bay and its inhabitants, giving the stereotypical characters enough dialogue and character beats to make them more interesting than a shallow cliché.

Check it out. This could become a great series, with Clark building up some intriguing characters and Zherno’s very stylised art, which will be amazing when he has to draw the occult nature of this series. I am interested to see where this comic goes, but due to its exposition nature I cannot say this is a must buy.