Script and Art by Stan Silas

Norman is a book and character that has had previous stories told, but this book represents the beginning. It’s serves as somewhat of an origin story. It doesn’t dive into (yet anyway) why Norman is a child serial killer. However, it does start off with what seems to be his first kill and the ensuing events. It’s the perfect #1 and doesn’t require the reader to have read any of the previous books, though odds are high that you will want to after reading it.

If you do come into this book without having read any of the others, the best advice would be to leave any preconceived notions at the door. If you were to allow yourself to 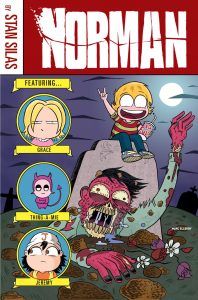 judge a book just by its cover, one could go into this thinking that it was going to be a book of mindless humor. It is far from that. It is an easy and fun read and isn’t overly complicated, however the story that is woven is also deep. We start by following a child named Jeremy that ends up being Norman’s first kill. There are a handful of pages devoted to this child’s mindset and his journey to a farmhouse before he is ultimately killed.

We then follow the mindsets of a trio of characters and how they deal with Jeremy’s disappearance. Of course this includes Norman, who is hilariously aided by Thing-A-Mie which serves as the devil on his shoulder. The two of them plan and scheme but ultimately Norman struggles with how to keep his secret and almost gives it up several times.

We follow their teacher, Miss Jameson, who is a fun character to follow as she is an inherently selfish person that cares most about the school’s raffle and her personal life. We also follow Grace, who is a girl that has a special club that is investigating Jeremy’s disappearance. It is through these interactions we see how various characters intertwine. Norman feels that Grace is getting too close to the truth and ultimately decides he must kill her. At the same time we learn that Miss Jameson is dating Grace’s father. He apparently has issues of his own as Miss Jameson is never allowed to visit his home, but when she does she finds that he could be a killer of his own.

It’s easy to see how when Grace turns up dead that we may see her dad get blamed. That would allow for Norman to again slide under the radar. The point is that it is hilariously written. Even more important is that it is well fleshed out in a way that could be surprising for some readers that would pass this by just by judging a book by its cover.

Buy. It’s weird to say that a book about a child serial killer is light and refreshing, but it is. This book was a hilarious fun and quick read. It shows character dimensions from multiple angles and that is something I did not expect. I tend to not enjoy this style of art, however for this book it was the perfect fit and was great to look at.  The $3.99 price tag seems a bit steep for this, but it is 32 pages. The enjoyment that I got out of it was fully worth the price.