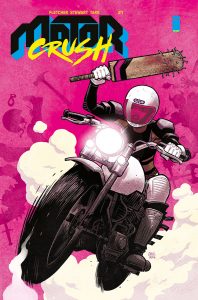 Fletcher. Stewart. Tarr. At the tail-end of DC Comics’ New 52, these three creators became bonafide superstars due to their highly successful fifteen-issue run on Batgirl and now they’ve become the latest acquisition of Image Comics. For the former Team Batgirl, their debut creator-owned title, Motor Crush #1, is a massive step forward in their collaborative efforts; it’s a prime example of how great a comic series can be when its creators are untethered to continuity and are allowed to just make amazing content. Much like the motorbikes that are featured throughout, this book is fast and loud and unwavering in its demonstration of those two elements. With all due respect to their work on Batgirl, this feels like the book Stewart, Fletcher, and Tarr were born to make.

Speed is an essential part of protagonist Domino Swift’s life as a professional motorbike racer. During the day she’s burning up the track attempting to garner enough publicity to hopefully earn a sponsorship opportunity while at night she’s participating in an illegal street races (called “Cannonball”) in an effort to feed her addiction to a drug called Crush that will make her bike even faster. It’s a bit unclear if Domino’s father—a former racer himself—is aware of his daughter’s nighttime activities or not but nevertheless the complexitity of Domino’s character is one of the more engaging aspects of this book so far. Not to mention it’s relieving to see a futuristic society presented in an Image book that isn’t also dystopian.

What makes the world of Motor Crush feel so different is in Babs Tarr’s unique art style. Those that experienced her art on Batgirl know that Tarr dabbled in a very anime-inspired look to that title and Motor Crush is like that but turned up to 9000(!!!). Most of all, her action sequences, which spread across various double-page spreads and wild, angular panels, allow the book to truly become alive with kinetic and vibrant imagery. Tarr’s colors are bold and bright and neon-infused throughout. Tom Muller’s designs help to capture the look and feel of the world, as well, with various social media-inspired overlays when introducing new locales and characters, while Aditya Bidikar’s dialogue bubbles are just as wild and unpredictable as Domino Swift herself. Through and through this book looks rad and has enough attitude to know it too.

Buy! One of the most anticipated titles from this past April’s Image Expo, Motor Crush #1 doesn’t disappoint. Cameron Stewart, Brendan Fletcher, and Babs Tarr prove once again that their superstar status is well earned with a book that’s positively brimming with personality. The former Team Batgirl are left to their own devices and the result is a fast-paced, kinetic, and engaging from start to finish. Stewart, Fletcher, and Tarr are jointly created as creators on this book for a reason: it feels like a book only they could create.