“The Not So Silent Night of the Harley Quinn”

One time, when I was in seventh grade, I went to a dance with a girl I had never formally met after her best friend, who I had a crush on, asked me to. I did this because I figured it would ultimately make the best friend realize what a good guy I was, thereby leading her to fall madly in love with me.

Which is to say, one time in seventh grade I was stupid.

Which is to say, sometimes I’m still stupid. But at least I’d like to think I’m not stupid in the same ways I was fifteen years ago.

Luckily, the odds are in my favor. Because despite best efforts or expectations to the contrary, people tend to change over time; maybe not in the big, brand new person sort of ways, but certainly on an action/reaction/decision-making front. The longer we have to garner new experience, the more substantial those changes tend to be.

I say all of this because, when considering our relationship to a nearly-octagenarian bat-themed superhero and our personal preferences regarding his appearance or diction or emotional stability, it’s important to remember that seventy-seven years of life are bound to change a person. To expect consistency from even our most beloved characters after so long is to disregard their passage alongside us through time. 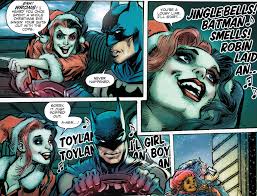 To it’s credit, Batman Annual #1 seems as much a nod to the generational evolution of the caped crusader as it is a short breath between the chapters of current writer Tom King’s action-heavy saga. From story to story we traverse the legacy of Bruce Wayne and the many iterations of both his appearance and persona. On one end of the spectrum stand Steve Orlando and Riley Rossmo, leaning into the horror stylings that defined September’s “Night of The Monster Men” to deliver a gorgeously asymmetrical take on Gotham and it’s nocturnal hero. On the other, Paul Dini and Neal Adams revisits the archetype of a campier vigilante, careening down the city streets alongside an over-the-top Harley Quinn in a story that seems plucked straight from the pages of pre-millennial runs.

King and the Scott Snyder/Fawkes duo (joined by David Finch and Declan Shalvey, respectively) contribute two of the collection’s stronger pieces (surprises all around), once again demonstrating the depth of their collective understanding of the legacy and ideology of Batman, as well as their individual mastery of storytelling, regardless of the form. Both craft clean, concise, fully realized narratives brought to life by the uniquely skillful renditions of their artists, and offer up satisfying conclusions that can seamlessly mesh within any incarnation of the Bat-verse. 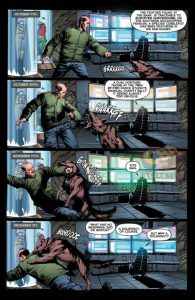 Unfortunately, the same cannot be said for the three installments joining them. Orlando and Rossmo come closest, but ultimately make too strong an effort to connect their story to an upcoming narrative, leaving us with a surprising yet unfulfilling conclusion. Meanwhile, Dini and Adam’s holiday romp reads as more of a cathartic retrospective of their time at the Bat-helm than a substantial narrative in its own right. The nostalgia is there, but a cluttered layout and abbreviated story arc leave us feeling unsatisfied by the conclusion.

Most confusing is the annual’s final and questionably titled chapter “The Insecurity Diversion” by Scott Bryan Wilson, whose eight pages are only salvaged by the toothy linework of Bilquis Evely. A cluttered plot disregards pacing and linear time in favor of befuddling leaps from scene to scene, introducing its antagonists with as little preparation as is offered to its plot twists. An astonishingly abrupt conclusion leaves us wondering if a page was left out of the final printing, and furthermore why this story was chosen to anchor an otherwise serviceable collection of stories. 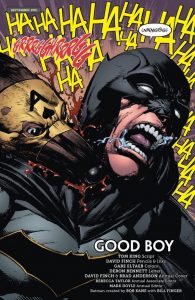 Which is all to say this: not every Batman story is the sort of Batman story you want to read. Thankfully, there are plenty of options out there. If nothing else, Batman Annual #1 offers you a few to choose from. Fifteen years from now, that may not be enough to convince me to buy an issue, but for the time being, I don’t regret a thing.

Verdict: It really depends. While a few included stories (mostly those named Scott Snyder and Tom King) manage to capitalize on the abbreviated format to offer an evocative, concise yet complete narrative, many more fall into the trap of reading as either installments of some grander, as-of-yet-unrealized plot, or worse, simply feeling unfinished. On the other hand, art throughout is top notch. So if you’re a diehard Bat-Fan and have five dollars to burn, there’s plenty worth checking out.