This was part four of the four part crossover event with Legends of Tomorrow, Supergirl, The Flash, and Arrow. Considering Supergirl and Arrow both were only half-crossovers, this episode had a lot to accomplish. It ended up being exactly what it should have been: a fun popcorn flick of an episode.

At the end of Arrow, we saw that the Dominators had a large weapon trained on Earth. As a result, we see Cisco, Felicity, Mick, Nate, and Amaya head to the 50’s when the Dominators first made an appearance. They end up trying to take an alien hostage in order to learn more. However, they are foiled by an X-Files style government agency that is able to take them by surprise and take all of them hostage. While captured, they are able to talk to the Dominator and learnt that their problem is specifically with Meta-Humans and they seem them as a threat.

While captured, Felicity and Cisco are able to break the rest out, but in the process hear that the captured Dominator is b 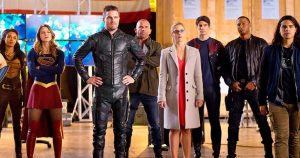 eing tortured. In a move that ends up looming large, they decide, largely at Cisco’s urging, to rescues the alien and send him on his way. This ends up making matters slightly worse as the show moves on, and Cisco learns a lesson about how easy changing time can be while trying to do something with the best of intentions.

Back in the present, we see the rest of the team getting ready to meet with the President when they get ambushed by the same shady government agency. They find that they know who the Metas are and that they know that Barry changed the timeline. In fact, it was that action that broke a truce with the aliens and that is why they are attacking. Furthermore, they will leave and not kill anyone if they are allowed to take Barry.

After the team convinces Barry not to give himself over, they end up putting together a plan that also ends up culminating in a big, Avengers-style battle. It was a lot of fun and looked beautiful. It was exactly what fans wanted when they saw there was going to be a 4-part crossover.

According to TVSeriesFinale.com, ratings blew up thanks to the crossover event. They rated a 1.10 in the 18-49 demo and a 3.33 for total viewers. These numbers are 72% and 80% increases, respectively. The numbers were so big that for the moment it has actually overtaken Supernatural for the fourth top show on the CW. The big question coming away from the crossover event is if Legends will continue to retain some of these additional viewers.