“Look at him.  He has no idea what happened.”

Valiant has made big waves in the super-hero comic department in recent years.  Not an easy task in a space that 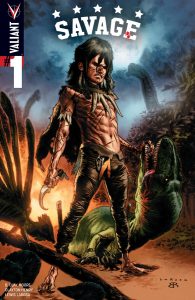 Marvel and D.C. have dominated for decades.  Enter Valiant’s newest entry: Savage!  When a star soccer player, his ex-wife and their baby are stranded on an island with minimal supplies, adventure ensues.  With stellar artwork and dialogue that improves as the issue progresses, it doesn’t take long for the issue to sink its claws in you.

Writer B. Clay Moore (Hawaiin Dick) introduces Savage with human-on-dinosaur action sequences as a taste of what’s to come, before quickly flashing back to show readership how we got here.  Initially, Moore’s dialogue between Mr. and Mrs. Sauvage isn’t too convincing, but dramatically improves after the couple find themselves stranded.  Moore seamlessly and believably introduces the characters’ drives and flaws without getting bogged down by them.  This inaugural issue pretty dialogue-light, in some ways riding shotgun and letting the artwork take the wheel.  By the end of the issue, readership should be invested in both parents, not to mention the nascent storyline.

The art duo (Lewis Larosa, Bloodshot Reborn; Clayton Henry, Harbinger Wars) are the driving force behind this comic.  The comic’s first several pages are dominated by art with extremely minimal dialogue.  That demonstrates how much confidence Valiant has in this team, and the ensuing art is a treat to behold.  The action panels that lead to the family becoming stranded are unique.  While husband and wife demonstrate significant differences, their obvious love and care for their child is believable and affecting — and is evident in the art as much as with dialogue.

Verdict: Check it Out.  The art is rich, and ultimately the driving force of the comic.  Since there are (so far) only three characters to connect with, there’s potential for deep connections between readership and these characters.  If you’re craving a new adventure comic, check out Savage #1.