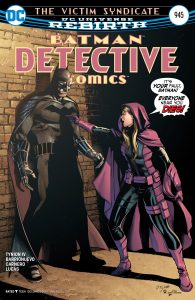 This week, the Talking Comics crew covers a slew of HUGE events in comics from last week ranging from the end of “LIES” in Wonder Woman #11 to an apparent major character death in CIVIL WAR II #7 (and the obvious death in Death of X #4…) to the debut of a new (?) team in Ultimates 2 #1. Also, Mara takes us to Star Wars land, Joey talks Super Powers #1 from the iconic team of Art Baltazar and Franco, and Steve and Bob have some theories about the new squad of villains wreaking havoc over in Detective Comics!!!

Also, things get deep as the gang considers AD: AFTER DEATH Book One, the long-awaited team-up between Scott Snyder and Jeff Lemire.

Also also, reactions to the newly announced rosters and creative teams for X-MEN: BLUE and X-MEN: GOLD books coming out of the upcoming Inhumans vs. X-Men and ResurreXion event.