We open with the screams of a captive Eternity.

Which doesn’t quite do justice to the brilliant storytelling that is the first pages of Al Ewing’s cosmic prose juxtaposed against the galactic psychadelia of Travel Forman and Dan Brown’s visuals. From the start, it is clear that The Ultimates2 will doubled down on the hallmark high-concept interstellar mysticism that so effectively defined it’s predecessors earliest chapters. 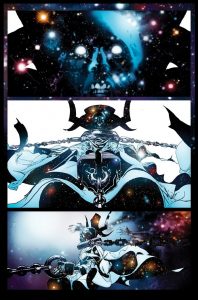 Within the span of three pages, we have a nod to the pre-Secret War incursions, hints of intergalactic unrest, and the long awaited revelation (at least in silhouette) of Eternity’s mysterious assailant, all ultimately revealed to be the visions of one Dr. Adam Brashear, busy experimenting with recreational psionic-resonance devises. It’s an expansive yet abreviated dream, one that leaves us with plenty of bread crumb trails to follow in the coming months (while conveniently sidestepping the need for extensive exposition to get us on the road); and perhaps more urgently important, it seems to signal the earth-bound detour of Civil War II is fading into the rear-view.

And yet, as intergalactic backdrop shifts to the interpersonal drama, things begin to come undone. 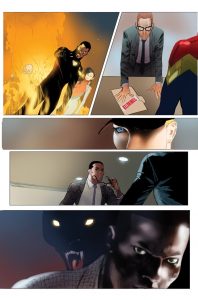 In contrast both to Kenneth Rockafort’s art on the preceding series, as well as the earliest pages of this issue, Foreman’s linework degrades over time. Where Rockafort’s art and impact was in many ways made more emotive by its roughness, the unpolished quality to Foreman’s pencils come off, at moments, as if simply incomplete: A painfully two-dimensional Monica Rambeau shifts shape from panel to panel as creases in Blue Marvel’s face come and go; One T’challa is intricately penciled into diner booth across from a disguised Captain Marvel, another glows with a blurry, almost computerized three-dimensionality. Though we may have stepped away from the devolving spin-cycle of guest artists that plagued The Ultimates’ finally chapters, we have returned with an equally scattered visual narrative.

To his credit, Foreman displays a great deal of facility across Ultimates2 #1, if not the consistency to unify his talents into a cohesive voice. And perhaps the latter will come as the series continues. But this new creative team still has a bigger stumbling block to overcome before they can reclaim the narrative heights of their previous chapters.

At the root of the problem is this: The Ultimates2 #1 is a “getting the band back together” story, which would carry a great deal more weight had the band not broken up in the final pages of just one issue back; even more-so had they been together longer in the first place. The steady march of Marvel editorial towards the promised land of seasonal relaunches and ever-shifting creative teams, while perhaps understandable from a marketing perspective, has effective cut the legs out from under our generation’s potential Hickman, or Brubaker, or Claremont. And while not every story necessitates such grandeur of scope, those that do now seem to flounder in their inability to make it off the runway in the time allotted. 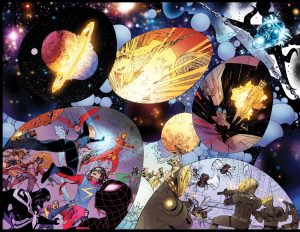 We can be grateful that Al Ewing is still at the helm of The Ultimates story, and seems willing and able to push forward with the same overarching narrative guiding his galactic epic. Now with a new Lifebringing mission bestowed upon the group, a most inter-demensionally qualified leader stepping up to take charge, and hints of long forgotten “ultimate” threats just around the corner, all stars have aligned to make The Ultimates2 a wild ride going forwards. Hopefully Ewing and Foreman will have enough room to truly get their story off the ground.

Verdict: Buy. With America Chavez now at the team’s helm (though disappointingly absent from the issue at large), it’s impossible not to at least get on board for the first arc. But hopefully as the story progresses, a unified and more sure-footed presentation will emerge.