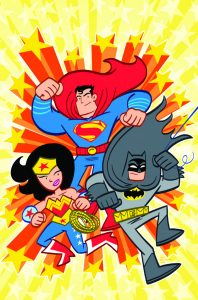 Every Saturday morning brother and I would do what most kids our age did – sit down and watch hours of cartoons, with the good guys winning and jokes and gags along the way. Super Powers #1 feels like you have been taken back to those Saturday mornings.

Franco and Baltazar delve into some DC lore that younger readers might not be as familiar with, but they make it so that everyone will get at least the gist of what is occurring in the comic. At times, the dialogue can feel too on the nose, but this does all just add to the effect of feeling you are watching an old cartoon, which throws you right into the action even if, at points, it feels forced.

If you have seen Baltazar’s other work in Teeny Titans, you will know his art and how, with the bright colours and simplistic style, it evokes a cartoon. There are quirky details, though, in the artwork, like when Superman ties up the Penguin and there are two actual penguins tied up next to him – what could two small penguins do against Superman?

Buy. This comic is ideal for younger kids and people who enjoyed a good bit of no-strings-attached Saturday morning cartoon fun. It may be a bit blunt with some of its delivery, but I can’t wait to come back for more. Also, who knew Alfred had pink goggles?