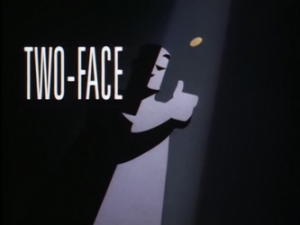 Of all the Batman: The Animated Series episodes, the Two-Face 2-parter stands as a milestone within the series’s development.  Not only is this story (quite aptly) the first 2-parter, it is also the moment that the writing team felt the series came into its own, providing a more mature level of storytelling that distinguished the series from its contemporaries.

Coinciding with the appointment of Alan Burnett as story editor, the Two-Face 2-parter really demonstrates the depth and artistry of the series, combining beautifully dark animation with an engaging and tragic story line. Harvey Dent and his alter ego Two-Face have always provided an enormous wealth of material for comic book writers, many of which are eager to explore the character’s Jekyll and Hyde persona. 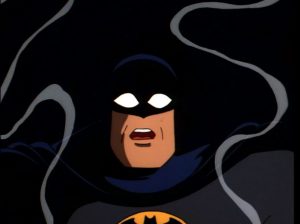 In Two-Face Part 1, Batman is partly responsible for Two-Face’s creation.

Similar to how Renee Montoya took the lead role of Protagonist within P.O.V., a similar technique is used here with Harvey Dent. The episode opens with a brilliant, Hitchcock influenced dream sequence, as Dent comes face-to-face with his repressed alter-ego ‘Big Bad Harv.’ Following this, the story revolves around Dent as we learn of his struggle with anger, particularly this repressed side of his psyche. Seeking help from a psychiatrist, Dent is then blackmailed by Gotham mob-boss Rupert Thorne, which leads to him being accidentally scarred when Batman tries to save him. With this, Dent is transformed into his coin flipping alter ego Two-Face.

Although the second story-arc perhaps lacks the dramatic beats of the first arc, ultimately the two episodes are a huge success. In focusing on Harvey Dent, we are given a largely sympathetic introduction to one of Batman’s most interesting foes. Dent is a good man, with noble intentions and a loving network of friends and family. He also appears as one of the few characters to have some semblance of a story arc within the series’s run, particularly within the series’s largely episodic framework. Having appeared within On Leather Wings and Pretty Poison, we already have a brief background on Dent’s history with Bruce Wayne, as well as his relationship with the police. Despite this, it is through his relationship with Grace that we are able to particularly see the humanity within Dent, a humanity that continues to endure following his transformation into Two-Face.

The Black/White design of Two-Face within Batman: The Animated Series would become iconic within Batman’s ongoing mythology.

Through Richard Moll’s excellent voice acting, the series presents the character brilliantly. Sympathetic as Dent and grizzled as Two-Face, Moll is able to show the two distinct personalities at war within the character. The series’s design of Two-Face is also ingenious. The use of Black/White suits illustrate the dual sides of light and darkness within the character. It’s a look that would become so iconic, it quickly transferred into other media formats (Such as the comics and Arkham Asylum video games). Not only this, within some incarnations, the coin is sometimes used merely as a gimmick or in some cases completely forgotten. Yet here, Two-Face seems unable to make a decision without it. Furthermore, it is through this obsession that Two-Face is ultimately defeated (Note: Batman: The Animated Series can perhaps be seen as the pioneer of the idea of using multiple coins to defeat Two-Face).

Although the episode’s change the Two-Face origin somewhat, it is not necessarily for the worse. Although the origin of Dent being the victim of an acid attack during the trial against Sal Maroni is almost perfect (as shown excellently within Jeph Loeb and Tim Sale’s Batman: The Long Halloween) the changes provide further dramatic value. Here, Dent is transformed by a chemical explosion, caused accidentally by Batman, when he tries to prevent Dent being shot by one of Thorne’s goons. This causes an great deal of guilt within the Caped Crusader, something Conroy’s vocal performance is able to sell brilliantly and further adds to the stakes as Batman tries to make up for his failures in the past.

The episode is also notable for the introduction of Crime-boss Rupert Thorne. Thorne would soon become a frequent adversary for the Dark Knight throughout the series and it’s easy to understand why. Through John Vernon’s rich vocal performance, Thorne is shown to be a tricky and powerful criminal who holds a iron grip on the city. Like Carmine Falcone and Sal Maroni within the comics, Thorne appears as a drastically different adversary from the standard supervillain fare within Gotham city. His inclusion, alongside his assistant Candice (fulfilling the role of stereotypical femme fatale), further bring the series back in line with its noirish roots and enrich the universe further for it. 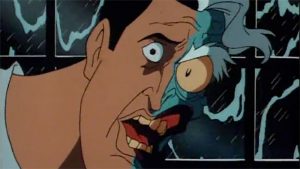 Alongside the story and excellent use of character, Two-Face Part 1 also demonstrates some of the best animation within the series. Whether it’s the brilliantly rendered explosion that scars Harvey Dent or the dark, moody-looking Batman staring down from a rooftop, the episode showcases the many fluid and clean animation styles that we saw within the series opener On Leather Wings.

Although the second part of the series drops slightly, it’s not so much of a distraction to take away from the great work being produced within this 2-parter. Perhaps the most standout moment in Two-Face Parts 1 & 2 is the reveal of Two-Face. Having been badly scarred and evoking Jack Nicholson’s Joker from Batman (1989), Dent screams for a mirror, before stumbling out from the Hospital room. As his fiance walks towards him, lighting flashes behind him, before revealing his newly scarred visage to her. Like the Universal Monster movies of the 1930s, this sequence demonstrates nearly everything the series gets so right about the character. The operatic monstrosity, the unleashed anger and, perhaps most of all, the tragedy that sits at the character’s core.

To finalise, Two-Face Parts 1 & 2 stands quite rightfully to demonstrate the heights to which Batman The Animated Series is able to soar. We’ve seen the increase in quality with episodes such as Pretty Poison and Be A Clown, but with Two-Face Parts 1 & 2 we have two episodes that demonstrate both the excellent animation and writing that has made the series so highly lauded. Here, the writer’s demonstrate the pathos that defines the characters, while focusing on story lines with dark, mature themes. It’s an 2-parter that is worthy of the fanfare and its standing as a turning point within the series development. For fans of Batman and any kind of comic-book storytelling in general, it’s a definite must see.