This is a futuristic, noir, detective crime-solving, mysterious cult-laden, horror book. Make sense? Perhaps that is the problem. It seems to be tryin 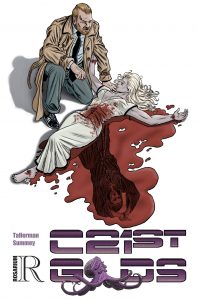 Things kick off in this issue with Connor, a detective, and his partner investigating a case of a missing rich lady. They visit an old architecture gothic-style house that is straight out of an old horror film. But we also see that they have futuristic cars and weapons straight out of a Sci-Fi movie. While dressed in clothes that make you think of the Gotham TV show. In fact, they almost look like Jim Gordon and Harvey Bullock.

They end up running across a robed, cult-like man who has murdered the rich lady and stage her in what appears to be a sacrifice of some kind. After the man stabs and kills Connor’s partner, he falls out a window and should have died. Of course the body disappeared.

Without spoiling too much, the rest of the book focuses on Connor’s obsession with the case, even after the case was removed from his office. Of course, the one death was just the beginning, and something much larger seems to be afoot.

It’s a quick read, because again, there are very few words to be read. This is a challenge, as the art is trying to tell a lot by expressions and it falls short of nailing it, which in turn actually can take the reader out of it. Tonally, the art was good, but at times the people seemed more like dolls than humans. The concept of the story is also neat, and the mystery of what the end game is going to be is intriguing, but the execution seemed to be lacking somewhat.

Pass. Unfortunately, there is enough lacking in this book that makes it difficult to want to check out another. It is an interesting enough concept, and perhaps will improve as it finds its groove.