Everyone knows Scott Snyder for his comic book writing on Batman, Wytches, The Wake, and other properties, but he is no stranger to prose. He started his writing career in literature with his short story collection “Voodoo Heart” exploring characters dealing with loss, sometimes at their own hand. His characters are tragically flawed and their attempts to free themselves of their Achilles’ Heel always has them falling victim to it. 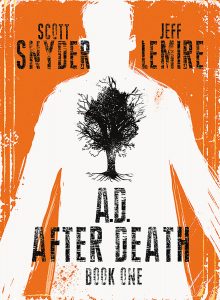 AD: After Death is a story about how death is no longer a part of the human condition. Snyder is employing his literary skills by combining them with graphic narrative and visual storytelling. Jeff Lemire, another giant of the comic book industry, is attached and both Snyder and he intend to push the boundaries of what comic books and prose can do together.

AD: After Death starts with Jonah Cooke’s first memory of a spontaneous family vacation in Florida. Snyder prefaces this memory by having Cooke write, “Someone once told me that all the clues to your life lie in your first memory.” He remembers a balloon his family followed after the vacation had fallen victim to bad weather. They capture it and call the phone number attached. When they do, his father speaks with someone from an elementary school in New York, who had a project for their students to see how far a balloon they released would travel. The prize was a children’s gaming system, but to the family’s disappointment it had already been claimed.

The anger that boils in Cooke’s father makes the next scene hard to see because in his enraged oblivion he doesn’t witness his wife collapsing or his child screaming for help. Cooke tail ends the memory by telling the reader that he often revisits this memory, but can’t pinpoint the meaning behind it before wondering what his last memory will be

Snyder’s prose allows the reader access to Cooke’s journal, giving Snyder the space to write as much as he likes, while developing his protagonist. This isn’t without purpose because Cooke’s memories and journal serve as an anchor of perspective in an extravagant sci-fi tale in which  society doesn’t have mortality. Memories are important to human beings because they allow them to reevaluate and rediscover something of themselves in the constant expiration of experience. This is evident in Cooke’s continual reexamination of his very first memory.

Lemire’s art is poetic and reminiscent of Terrence Malick’s Days of Heaven. Even while drawing futuristic buildings, Lemire maintains the natural aesthetics of farmland and mountain ranges.  During the memory that introduces the story, Lemire captures the sentiment and crucial image of each moment that Snyder’s prose communicates. Lemire’s watercolor use in the comic portion of AD gives the book a warmer tone that allows the reader to digest beautiful sunsets or cityscapes in the context of an advanced 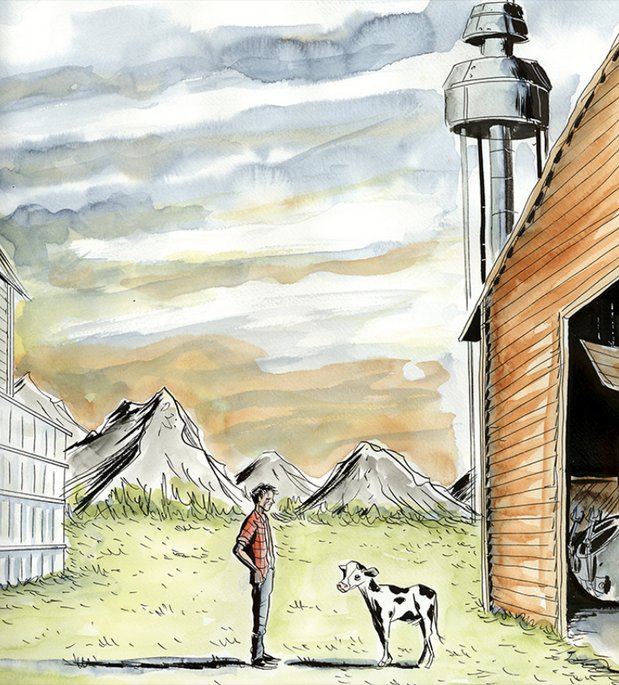 society or extraordinary circumstance. The watercolors work even better in Cooke’s journal because the detail of colors dripping down the page give the journal a more personalized appearance. The watercoloring for the vignettes of people, places, or things that Lemire illustrates creates a dissolving effect indicative of how memory can fade away.

The visceral nature of Snyder’s prose is effectively expressed through Lemire’s art because the snapshot-like nature of memory is executed on a page to page basis. One’s memory can be far reaching, but only in the still images a person can access or the transmutation of their experiences into meaning. Snyder and Lemire are portraying memory’s clear limitations.

The threat of death no longer a concern for the human condition has Snyder and Lemire meditating on what it means to be a human being. It’s a large question to tackle, but through the lens of Cooke, a self-proclaimed kleptomaniac, and his admittance of being responsible for “the way things are” it can provide readers some answers (or at the very least some more interesting questions). Humanity has been robbed of a crucial process to their existence and it’s Cooke’s fault for stealing what he writes is “the wrong thing.”

Loss is a hugely important theme of this book whether it’s Cooke’s family losing the video game system or humanity losing the ability to age and ultimately die. The book is a guilt-ridden, anxiety-inducing,  melancholic tale that searches for meaning within the human experience. Snyder and Lemire take their time and it works because the characters of the book have all the time in the world. Lemire’s art can illustrate the sprawling hills and fields of the midwest because this book has the time to admire these natural beauties. Snyder does the same with his prose as he lingers on Cooke’s thoughts.

AD: After Death is a book that wanders through the mind of Jonah Cooke and the post-death era humanity has entered and existed in for the past 825 years. It’s lyrical in its art and insightful in its prose, but having those two mediums in constant flux produces an internal and external synchronization. The mystery of why people can no longer die is enticing, but the effect of this enigma on a society is the rich territory Snyder and Lemire are and will continue to explore.

Buy! It’s a three-part book with a lot to offer if you’re willing to do a little work. It’s a philosophical book that examines how a society functions when death is no longer a concern, equipped with a mystery that will keep readers engaged. It isn’t a long investment and it’s succeeding with its utilization of the two mediums. It’s a good gateway for people looking to explore books that blend prose and visual storytelling to create a more engaging and thought provoking book.