It’s refreshing to see this season continue to embrace the street level aspects that made this show so good back in Season Two. That was, and continues to be, the best season this show has had. However, this season is a welcome change from the last two. The flashbacks are great, the new team is coming together, Oliver as mayor is fun, and best of all: no Olicity.

In this episode we saw the team dealing with a new vigilante. Called Vigilante. The moral issue at the epicenter of this episode is that this guy is taking out bad guys, but is also doing it by killing them. We just dealt with the team finding out that Oliver basically used to be this guy in the last episode, so it was interesting to see those threads show up again. We also 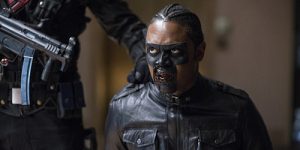 see Oliver grapple whether he is doing enough to help the city. If he took more drastic action, would there be more progress in the city?

The Vigilante was a worthy adversary in this episode. It was great to see an interesting bad guy not be an archer. There was one particular standoff in a bank that was quite intriguing. If there was one complaint about this character, it was that he was so efficient so quickly. Unless there is another fake-out, which is possible, the Vigilante is Adrian Chase. If that holds true, how did he get so good so quickly? He flat out disappeared Batman style twice in this episode. Regardless, I am glad that this story line isn’t wrapped up and that we will get more of it.

According to TVSeriesFinale.com, it was another very good week in the ratings for Arrow. The show seems to be rebounding after some struggles earlier in the season. It scored a .70 in the 18-49 demo and 1.860 for total viewers, which kept things on par with the last couple of weeks. Arrow is actually right in line with Supergirl in the 19-49 demo, but still comes behind in total viewers. It continues to hold steady in the 3rd spot at the CW.

“What is it with this city and serial killers lately?”