“Dawn of the Midnight Angels”:

“People By The People”:

—SPOILER WARNING for BP: World of Wakanda #1, and the myth of the United States as a post-race society–

To speak about Black Pather: World of Wakanda #1  without first naming the significance of Roxane Gay and Yona Harvey as the first women of color to write a series for Marvel would be negligent. But to praise Marvel here and now is to express gratitude to a society that confuses tokenization for substantive progress. Eight years ago, a brilliant man was offered a job he earned and we called it a solution. This week, a man inseparable from his bigotry was offered the head of the table, and we could not allow ourselves to understand why. One small step is only one small step. We are still too close to the fire swallowing the house.

There is, of course, more to this story, but it difficult to begin anywhere else. World of Wakanda, by virtue of its content and its creators, is a tangible step forwards in service of the continued trajectory of the comics medium towards a more inclusive and legitimately representative end; but that end is also long overdue. Two brilliant women were offered a job they earned. To celebrate that as some grander victory is to just as easily flip the coin, to conflate a lack of sales or an underwhelming story with a failure by Gay and Harvey and, in turn, one more reason to return to the white male status quo (to the detriment of all). 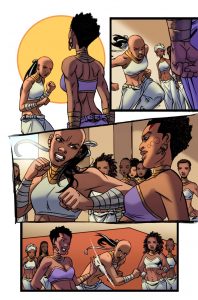 All of which is to say, when you read World of Wakanda #1 (and you should), read it on its own terms, as the first story by a talented writer exploring a new medium. Because Gay’s entrance into the comic aesthetic is not seamless: from the issue’s earliest moments, establishing shots are forsaken in favor of a headlong leap into expositional dialogue. We are re-introduced to then-Captain Aneka as she begins the instruction of a group of young Dora-Milaje-to-be, including her future lover Ayo. Their subsequent and seemingly inevitable clash reads as hurried, with the jarring interjection of thought bubbles undermining both the nuance of the moment, as well as any attempts by artist Alitha E. Martinez to bring their underpinning emotions to light.

Those who come to World of Wakanda with a prior awareness of Gay’s work (if not, you’re missing out and should immediately make steps to rectify this) will be quick to note the absence of her characteristically startling command of imagery, a strength that seems to have been muted by the necessities of the medium. Gay now directs the moment, but no longer defines its construction, and her palpable desire to do so presents a constant tension within each panel between the need to say or withhold too much. 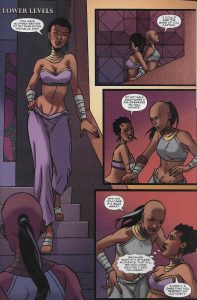 But in the midst of this, a more important narrative emerges, marred by a hitch in the gate but building to a gallop nonetheless: As Wakanda spirals towards a preordained series of disasters, Gay and Martinez depict the blooming of a relationship that defies its fantastical context in service of a graceful reality. Ayo and Aneka are in love. Their love is heartfelt and petty and grand in the way love is, bleeding across the boundary of occupation and routine to color every action as a part of their story.
We see it in the smallest moments: Ayo’s restless sleep juxtaposed against Aneka’s distracted watch over the city; a hand reaching, then pulling back from an unanswered knock at the door after dark; a quiet arm slipped around a will-be lover in the face of Namor’s fury. Gay understands the way in which we, as humans, hold the distance between our many realities simultaneously. Even though we already know where this story is going to lead us, the promise of a further investigation of this dichotomy, as well as the creative prowess of the hands that guide it, make it clear that the journey from now until then will be well worth following. 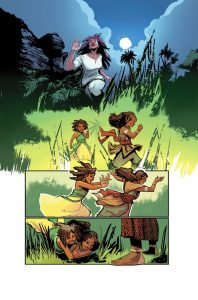 Verdict: BUY! Not a perfect first issue by any means, but a strong step towards what promises to be a powerful series, both on its own terms and in concert with the main Black Panther title. Add to that the excellent “The People For The People” backup (a story worthy of its own review) written by Harvey and Coates and illustrated in a brilliant mix of grounded surrealism by Afua Richardson, and you end up with an issue worth every penny.