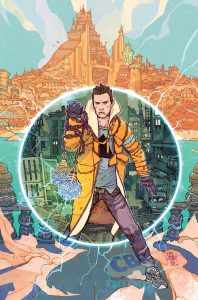 Fireman’s jobs these days are changing-they are doing more accident work. I grew up one road away from a fire station and I live right next to a park, and the firemen probably got called out to saw people out of the swings more than for actual fires in the local area. However, I don’t think that their job will quite be the job of the firefighter Jordan Molossus in “Namesake”.

Every seven years, for a week, portals open on earth to another world, making it the oddest leap year. Jordan has to put out magic fires caused by hexes and curses caused by people from the other world Ektae. The issue ends up with Jordan on a quest to bury his parents on Ektae with there, inevitably, being a few problems in his way (otherwise there would not be a story).

Orlando does a good job building up the world, but there are tracts of text that are thinly veiled plot points; it’s a first issue, so this is needed, to an extent, but perhaps this issue gives the plot too much weight.  Orlando has taken some of his sensibilities from “Midnighter” in the few fights that occur and hopefully the oncoming issues will carry on these sensibilities.  Jordan’s character is shown to be hot headed and inventive, especially in the way he gets around the border gate to the portals. However, Orlando doesn’t develop his character to the point where I am actively rooting for him.

Rebelka’s art sometimes has some odd lighting or too much shading, but apart from that the art does its job and does it well.

Give it a shot. Orlando does a good job establishing the world of this four-issue miniseries and the art is a good addition, but there is nothing that makes me feel a great need to pick up the remaining issues.