One of the biggest issues coming into this season was how they were going to juggle so many characters. You of course have the Legends, but you also have the Legion of Doom and the JSA. However, it hasn’t been an issue for two reasons. First, the Legion hasn’t even developed yet. Second, they have left the JSA firmly behind. So the issue hasn’t been an issue at all, and unfortunately that has been a problem.

So far, each episode has been incredibly stand-alone. The larger season long storyline doesn’t seem to be developing. Despite that, we are 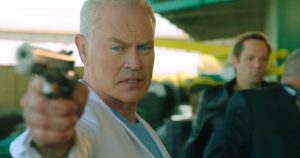 getting pretty good character development and that is the driving force of this show. The best of that came in this episode with Ray and Mick. This friendship is the best duo dynamic on the show. They are funny and charming. Unlike Stein and Jax, who are constantly at each other’s throats. It wears thin.

The other important character development was largely with Vixen, whom we learned was romantically involved with Rex Tyler. Not only that, but we learn that her and Rex were planning on soon leaving the JSA together. This was revealed when they encountered Obsidian from the JSA in 1987, and he immediately questions Vixen on why she abandoned them.

Together, the team had to work together to foil Dahrk as we learn he is the Senior Advisor to Reagan. He planned on blowing up the peace talks that clearly would have set the Earth on a more disastrous course. By and large, it’s another fun popcorn romp. While this qualifies as another largely stand-alone episode, the character development is where the payoff lies.

According to TVSeriesFinale.com, ratings were essentially the same for this episode as it has been throughout the season. They rated a .60 in the 18-49 demo and a 1.77 for total viewers. These numbers are right on par with previous episodes. The show is firmly set as the fifth place show for the CW.

“Call me Haircut again and I’ll ice you.” Ray Palmer