Now that Tobias Church is out of the picture, this season seems to be turning things over to Prometheus. The true Big Bad for this season was on full display in this episode from the opening scene. Prometheus lures Green Arrow and Diggle to flaming words on the ground saying “So It Begins.” 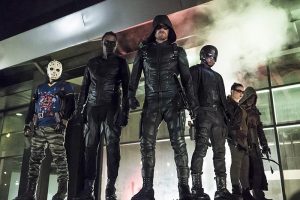 The question is what is actually beginning? Well, in this episode it seems to be the beginning of what is meant to be punishment of Oliver. Prometheus begins going on a serial killer rampage with victims that initially seem to have no connection. It doesn’t take long to determine that the victims have names that are anagrams of people that Oliver killed in the first season. Whoever this person is feels deeply wronged by Oliver. It has also been said that Oliver helped create this person.

At the end of this episode, we are led to believe that Prometheus is actually Quentin Lance. He is still battling his issues with alcohol and is in a significant amount of pain.  After missing an event that Lance helped pull together, we see him drunk in his apart
ment. We also see him with a throwing star and a cut on his forearm. Presumably this is the exact cut that Evelyn was able to tag Prometheus with during
an earlier skirmish.

So, the real question for this season is who is Prometheus? This is similar to last season’s “who’s in the grave?” question.  Lance makes sense. We see the cut and we see his pain. His build makes it a possibility. He has the reasons to want to torment Oliver. It’s somewhat believable that he would have th 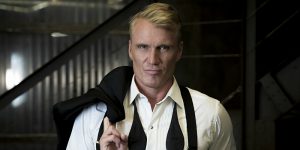 e physical skills to be Prometheus. Despite those dots, I don’t believe they will connect. This feels like another classic fake out from these show runners. We will see.

We do get our first look in the flashbacks as Dolph Lundgren as Kovar. While Lundgren is hardly known for his acting range, he plays this role very effectively. This character combined with the Bratva and Anatoly has made the flashbacks very entertaining.

According to TVSeriesFinale.com, it was a very good week in the ratings for Arrow. It scored a .70 in the 18-49 demo and 1.946 for total viewers. These are increases of roughly 17% and 21% from last week. Additionally, those numbers make it the most watched episode for the season. It is now for the moment firmly entrenched as the CW’s third highest rated show below The Flash and Supergirl and just ahead of Supernatural.

“You play, what is American term, ‘Douche’, very well.”