—Spoilers below for Occupy Avengers #1 and Civil War II—

Here’s the problem with super heroes:

The Dakota Access Pipeline is a 1,172-mile-spanning transfer pipeline intended to shuttle oil from the rich-in-crude Bakken Formation through four states, including Iowa and Illinois, as well as the nominal Dakotas. Though originally planned to travel north of Bismark, ND, threat of contamination to the capital city’s water supply resulted in a diversion to the route, which now passes through the Standing Rock Sioux tribal land. Though proponents of DAPL have asserted that members of the tribe had already assented to the pipeline’s passage through their land prior to any construction, the tribe itself (as well as numerous supporters) have since engaged in a massive campaign of peaceful resistance, naming the project’s threat to both the sovereignty and independence of their home, in line with a longstanding tradition of white oppression and appropriation of First Nation’s land and resources, as well as the more immediate and practically concerning impact upon the tribe’s access to clean drinking water, which DAPL seems poised to contaminate. 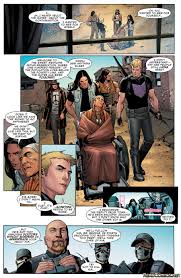 I mention the case of Standing Rock here not only because of the urgency and stakes of the struggle (for more on that, it’s worth your time to read this plea for a better understanding of the context of #NoDAPL by Kelly Hayes) , but also because author David F. Walker’s newest self-described “story for the 99%”, Occupy Avengers #1, is set against an allegorical backdrop that mirrors the current #NoDAPL protests. Unfortunately, despite the best intentions of its creative team and the caliber of talent that defines them, the story falls short in the thoroughness of its treatment of the systemic cultural oppression and erasure that defines its narrative, and as such fails to make good on the implicit promise of it’s name.

We begin the Occupy Avengers epic in the wake of Civil War II and Hawkeye’s acquittal for the murder/mercy-killing of Bruce Banner. A troubled Clint Barton has wandered his way to Santa Rosa, New Mexico, pursuing redemption in the form of a “Hawkeye Is For The People” themed road trip. His acclaim earns the unwanted adoration of grandmothers and truck drivers and diner patrons everywhere, as well as the skepticism of one Sheriff Ortiz and her partner, everyone’s favorite time-transposed First-Nation’s hero, Red Wolf. 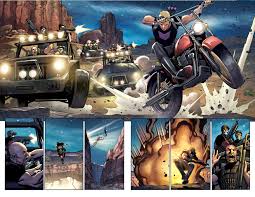 What begins as a bit of “what are you really up to” banter quickly settles into a morose team up between our two animal-themed heroes as they explore the recent contamination of Sweet Nation Indian Reservation’s water supply and the destitution exhasterbated in its wake. Walker’s dialogue here strays from non-sequiter-laden, Fraction-esque quips to heavier-handed philosophical musings. Pacheco’s linework and Oback’s colors are sharp throughout, if not the slightest bit clean for the should-be-gritty setting of Walker’s narrative; on the whole, the scene delivers an emotional wallop within an all too often disregarded setting. But it takes less than two pages for our attention to turn away from the all-too-honest glimpse into the lives chronically disregarded people and towards the all-too-stereotypical paramilitary goons hiding behind the scenes and their inevitable gun-wielding pursuit of our protagonists.

The medium of comics (especially those of a heroic variety) have long displayed their potential for delivering a layered message that appeals simultaneously to our action-hungry sensibilities and a greater moral or political calling. But in absence of a nuanced hand, it takes little time for an allegorical narrative to slip into the realm of social-justice-movement name-dropping hero romps, hooking us with a nod to contemporary conflict, only to pull back the curtain and reveal a hydro-powered metahuman to blame. And in almost every case, such a turn is to everyone’s detriment. 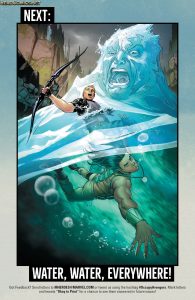 Because here’s the problem with super heroes: They aren’t real. Which isn’t a problem in and of itself; in fact, it’s quite effective when it comes to closing inter-dimensional wormholes, or shutting down the greedy expansion of a power-hungry crime lord, or defending the earth from cosmic invasion.

But when we bring heroes across the border into the very real problems that occupy and influence the daily lives of very real people, we run two significant risks: first, pretending there is a solution to be found at the far end of an arrows flight; or second(and perhaps even more problematic), inventing one.

When we are taught to expect the big bad lurking behind every injustice, we learn to focus on the villains we recognize (The money-hungry mob boss; the demagogue with bigotry leaping from his tongue) and to ignore the ones we don’t. There is very little that is sleek and sexy about mandatory minimum sentencing, or gendered bathroom legislation, or a centuries-old and still continuing history of wresting land and liberty from the hands of America’s earliest population; and there is even less for Hawkeye to take aim at. But these are the problems that define our country and the lives of so many of its citizens in a way that necessitates serious and thorough consideration, empathy and reaction.

David F. Walker has pitched Occupy Avengers as a bridge between the grandiose heroism of the 616 and the everyday, down to earth, ordinary struggles of it’s readership. But in order to do so, it’s essential that he remember which part of that equation is fiction.

Let’s see if he can make good on his promise.

VERDICT: Not the strongest start to a title baring the self-imposed burden of being a social-justice-centric narrative. But there is plenty of time for David F. Walker and co. to right the ship. Wait and See is the way to go.