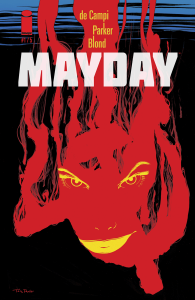 Art by Tony Parker and Blond

One Russian Defector ( or as the comic says , “In Russia we have no word for defector, just traitor”) , two KGB officers sent to kill him and three US government officials trying to catch the KGB officers. This sounds like a generic spy movie synopsis and a cheesy one at that, but Campi takes this basic concept and injects in great character that elevates this comic.

Whilst the story is quite cut and dried until the end, what Campi does is sell the characters to y
ou. Each of the characters instantly exude personality to the point until, by the end of the comic, you are left wondering how are they going to get out of this one and, like any good procedural, leaving you wanting more. I mean, we have the two KGB officers deciding, after their job is finished, to go off with some stereotypical hippies to the desert – what could possibly go wrong with that plan? Apparently, an awful lot, as the other half of the comic illustrates to us.

The art by Parker and Blond evokes the 70’s and looks tremendous, with the colours and the inking blending wonderfully together. There are four pages where the two Russian operatives take LSD laced Vodka, (I mean, what else would they drink?) that showcases just how good the art and colouring is, but also the layout of the comic shifting in turn with the drugs into this weird and beautiful design.

Buy. This issue feels like the best episodes of ‘The Americans’, just with fewer wigs. As a first issue goes, it is good and, for the art alone, it’s worth checking it out.