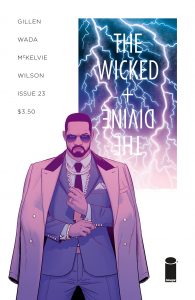 This issue is formated as Pantheon Monthly an in universe publication that exists to report on the gods and their activities. It’s been roughly three months since Ananka’s death and the gods have been busy. The interviews that follow cover rebuilding, politics, love, performance, sex and saving the world. To draw the reader in the issue opens with the first ever interview with The Morrigan and later on a never before published interview with Lucifer.

With this being the beginning of the Imperial Phase story arc and some time having passed in between this issue and last it’s not had to imagine that this easily could have been an issue of nothing but exposition. But Kieron Gillen manages to present several issues worth of story, character development and clever dialogue in only thirty pages. This issue is an amazing example of a twist on traditional comics. It uses Kevin Wada’s beautiful art and small but extremely talented group of writers to the greatest effect. The comic is put together far better than your average magazine and even has advertisements for things in the world of Wicked + Divine. The characters read like them even without seeing any kind of facial expression or body motion. Lucifers section is particularly heartbreaking due in part to the fact that we know what’s coming and she doesn’t. Shes ording old fashions, talking about sex and having fun regardless of how dark it gets at times she’s alive. Lucifer is one of the most popular characters but she was also the god of this cycle with the shortest life span. This has left fans wanting more of here in any form they can get and this short interview is bound to please.

Kevin Wada’s art is gorgeous and because the issue isn’t laid out like a traditional comic every page turn brings something different whether it be a full page splash, just the top half of the page or splashes that only come on to other pages a little. The art is in the style of a magazine photographer and it has a way of bringing out the sexy, innocence or the slime of whoever is in the shot. Really giving the reader a feel for who is being interviewed. It seems like the text is accommodating the art and giving it room to breath making for very natural feeling images and easy to read pages. The last two pages of the book have a section for “Undisputed Facts” about the night that Ananka died that includes pictures of her killing Minerva’s parents and post mortem photo. It also has hilarious little bios about all of the contributors to the book and a humourous little three panel cartoon about Ananke’s death.

Vardict Buy. If you’re a new reader this probably isn’t the most ideal jumping on point. With the format being so different and things have been so shaken up so much. However for the regular readers this is an excellent transition into the Imperial Phase. Through and through this book is phenomenal weather it be the writing or art. This twist on traditional comics storytelling is an unexpectedly and welcome change for the standard comic. It was able to convey a lot of information in a way that made it fun and interesting to read. This is promising start to what is bound to be a more than average adventure with the gods
.