After the last episode, the number one goal of Team Arrow was to get Rene back. We see a captured Rene at the beginning of this episode being brutally tortured by Tobias Church. This part of the story actually gets resolved quickly. The team, with Diggle, is able to locate Church and rescue Rene, but we quickly find out that Church was able to learn that Oliver is the Green Arrow.

Since the team knows that Church’s plan requires killing the Green Arrow, or Oliver, they enlist the help of Christopher Chance, the Human Target. Chance is a DC character that is a master of disguise, helping people that have a target on their back. In this episode, he poses as Oliver Queen and helps put up the appearance that Oliver dies when Church attack 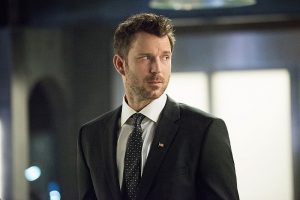 Human Target was actually adapted as a TV show back in 2010. It ran for two seasons and starred Mark Valley as Chance. This episode was far removed from that show, and honestly there probably aren’t many people that remember that show. However, it would have been great if they could have got Valley to guest in the part for this episode. It was a wasted opportunity and quite frankly his inclusion in this episode wasn’t even needed.

With everyone thinking that Oliver is dead, Church moves forward with his plan. This allows the team to surprise them and, ultimately, take him down. Overall this was an enjoyable episode that had a lot of highs, but also its fair share of lows. Despite that, the trajectory still has this show on a course that fans should be optimistic about. Oliver is growing and there is hope that he could finally be headed towards the character in the comics. Diggle being back with the team and helping mentor this team was refreshing. There are reasons for fans to be encouraged.

Some of the balance on this season hangs with the big bad Prometheus. Tobias Church was a great mini-villain, and much of the fate of this season lies with how well they flesh out this character.

According to TVSeriesFinale.com, it was another unfortunate drop for the series. It scored a .60 in the 18-49 demo and 1.6 for total viewers. This really shouldn’t be too surprising though, as it was against Game 7 of the World Series. Quite frankly it could have been a lot worse. For the season, Arrow is neck and neck with Supernatural for the CW’s third top show.

“Spartan is such a badass.” Evelyn