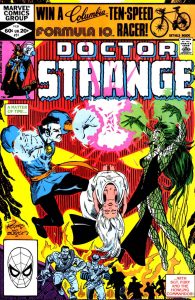 Roger Stern is one of the Sorcerer Supreme’s greatest writers. Roger Stern is also one of Marvel’s most underrated writers. Stern joined the House of Ideas in the late ‘70s along with creators like John Byrne, Christ Claremont, Frank Miller, and Jim Starlin. Where his peers were launched to stardom and comics glory Stern seemed happy to write some of the best comics produced in the ‘70s and ‘80s. Stern had an epic run with Spider-Man, on both Amazing Spider-Man and Peter Parker: the Spectacular Spider-Man. He wrote one of the best runs on Captain America along with Byrne on art and his time on the Avengers is one of my all time favorite runs on that title. He was even instrumental in the creation of the West Coast Avengers, which just like Stern is an underrated book in Marvel history. He also spent a long period of time at DC on their Superman titles. They are entertaining comics but I’m personally more partial to his Marvel work.

Of all the great comics Stern has contributed to and of all his excellent runs one of my all time favorites is his time on Doctor Strange. Stern had the daunting task of replacing the incredible Steve Englehart who had relaunched the title with Frank Brunner. Englehart and Brunner had revived Doctor Strange with an incredible run and Englehart and Gene Colan had continued with some great tales of their own. But this run had a horror vibe that had not really been present in the Doctor Strange tales before. Stern was smart about his follow up run and took Doctor Strange out of this horror theme and wrote the book and Doctor Strange as a more super heroic figure. It was brilliant.

Roger Stern had a long run on the title. It wasn’t a consistent run as there are a few two to three issue arcs where we get a guest creative team but he was the principle architect of the Doctor Strange comic in the early ‘80s. Stern embraced the weirdness that is inherent with a sorcerer who commands the dark arts but the book became bright and ingrained in the main Marvel Universe. Not only did Doctor Strange do battle with purveyors of the dark arts and demons for nether realms but he also combated super villains and in some cases simple bank robbers. His supporting cast morphed as Clea, Doctor Strange’s pupil and lover, left to return to the Dark Realm since Stern did not like the idea of the teacher sleeping with the student. He replaced Clea with Morgana Blessing who had a mystical tie to Doctor Strange from their first meeting in issue #48 but is also a human new to the world of mysticism. It was a long running plotline that was new and different for Doctor Strange. Constants though were business manager Sara and faithful manservant Wong who emerged more as a colleague and friend during Stern’s time, which has thankfully become the norm as the characters progressed.

Some tremendous artists, such as Marshall Rogers, Michael Golden, and the great Paul Smith, joined Stern on his run. Frank Miller was supposed to be the original artist on the run, Marvel even had a house ad run in their books, but Miller bowed out for Daredevil and was replaced by Marshall Rogers for the Doctor’s time travel tale as he fought his way back in time to rescue Clea from Dormammu as he fought alongside Nick Fury and the Howling Commandos as well as witnessing the Fantastic Four’s first meeting with Rama Tut on his way back in time. This was a very enjoyable story and it was nice to see the modern Doctor Strange tour a retro Marvel Universe. Michael Golden joined Stern for issue #55 as Doctor Strange deals with the loss of Clea. Golden’s artwork was breathtaking. The story was a take on a Wonderful Life as Doctor Strange travels in his astral form to see what would have happened if he had not become the Sorcerer Supreme. It ends up being the D’Spayre trying to destroy the Doctor but by the end the Doctor see’s brighter days on the horizon.

Legendary artist Paul Smith joined Stern for issue #56 which is an origin story where new readers are introduced to the Doctor and how he came to be. Smith Returns with #65 and does a nice little run on the title which sees Doctor Strange deal with a charlatan claiming to be a powerful sorcerer. Smith and Stern then have Strange help the Black Knight deal with his ebony blade and its corrupting influence on its bearer. The final arc of this duo sees Doctor Strange return to the Dark Dimension, home to Dormammu, to help Clea defeat her mother Umar and finally take control of the land. It’s a short pairing of Stern and Smith but it is a wonderful time period for the title.

Stern’s final story returned the characters from the ‘70s Tomb of Dracula title and had Doctor Strange dealing with the Vampire nation by mastering the Montessi Formula, a spell that could end the curse of the Vampires. He also wrote the highly entertaining Doctor Strange: Triumph and Torment graphic Novel where Strange aids Doctor Doom in rescuing Doom’s mother’s soul from the grasp of Mephisto. The graphic novel is also a chance to see early Mike Mignola art and it does not disappoint.

Overall Roger Stern’s time on Doctor Strange was an entertaining time and one of the highlights of the Doctors long and historic career. It doesn’t hurt that some of Marvel’s finest artists of the time graced the pages he wrote but the books are not only pretty, they are enthralling and wonderfully crafted tales. I keep hoping that I will see A Roger Stern collection of his time on the title but it has yet to happen. You can find some of his tales in various trades but not in one complete collection. The back issues are usually easy to find in back issue bins for a reasonable price and in some online formats. With the MCU Doctor Strange hitting theatres this week there is a greater possibility we will get more back material of Doctor Strange back into print and hopefully the Roger Stern era will be among them.