“How is it that you guys haven’t managed to kill yourselves yet?”

At the end of the last episode, we saw Ray saving Heywood’s life by using his altered super serum on him. We pick up in the third episode learning that Heywood now has powers. He can heal quicker, or normally, and also can turn his body to steel. Like Colossus, but he isn’t like that all of the time. It’s almost neat, but is also rather distracting because it looks incredibly fake. The effects they use to make Firestorm are much better. 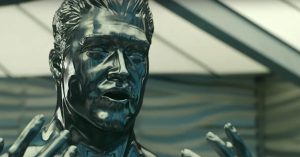 We find out that Heywood has powers as he stops Vixen from knocking out any members of the crew. After the murder of Rex Tyler at the end of the last episode, she stows away on the Waverider assuming that one of them is the killer. She knocked out everyone until Heywood was able to use his new powers to stop him.

Of course Heywood has no idea how to control these powers, so Sara tasks Ray with teaching him since he made the serum. As they are training, we have a fun scene where Atom and Steel are fighting each other. Of course, this goes poorly and Steel falls out of the Waverider into the time stream. Ray goes to save him, but they end up in 17th century Japan.

The rest of the episode serves as a breather from the larger story that is being told this season. The crew goes back to save them, but they end up staying to save a village from a ruthless dictator. On the whole it was a light, fun episode that helped us get to know Vixen as she ends up joining the team in her search for Rex’s killer. We see Steel get his powers and learn how to use them. We see Sara

grow as a leader. And we also see Ray’s suit become destroyed. This could potentially lead to a more traditional take on Ray Palmer as the Atom. And, most importantly, we got to continue to see Mick be the most hilarious member of the team with his constant stream of grumpy one-liners.

There was also one other storyline introduced in this episode that we may see develop in a slow burn. While the rest of the team is doing their thing in Japan, Stein and Jax were back on the Waverider getting into their own bit of trouble. They find a secret compartment that Rip kept secret from them. With further investigation, they find a recording from 2056 Barry Allen. We do not learn what the message said, but they agree to continue to keep it secret…

“I don’t want to shoot you guys. I love ninjas.” Mick