The first thing that readers should know about this book is that it is extremely graphic. It is for adults only and there is even a disclaimer on Comixology that is has themes of sexual violence and could be disturbing to some readers.

The story focuses on Emmie, who as a teen was a victim of sexual assault. We see brief flashbacks of Emmie before her life was cruelly changed. We see her in the present and 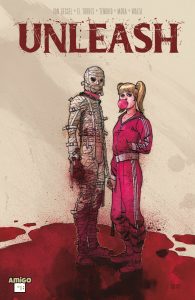 how she chooses to fight back. She has a mission. She has trained and she has prepared herself for that mission. This mission is to find sexual predators that weren’t properly punished. Her mission is to inflict the same pain upon them that they did on their victims.

In order to accomplish this, she has a particular “machine” at her disposal. This comes in the form of her own sexual predator (we assume) that she has locked away. When it is time to do some avenging, Emmie has him dress in what can best be described as a mummy-like gimp outfit. She leads him around with a chain, and when they search out a sexual predator she unleashes him on her target. Not to kill them though. To exact the same type of brutal pain that they did to their victims.

We see this transpire with one such target in the first issue. Emmie seems to have a moral code reminiscent of Dexter. She must have proof that the victim was in fact guilty. And, in the moments before her brand of punishment is exacted, she makes the target confess to his crimes.

By the end of the first issue, we see the determination that Emmie has. However, we see the pain that she still lives with, and will always live with. She also doesn’t know the identity of her attacker when she was a teen. Undoubtedly, this story is going to take us in the direction of finding that attacker.

As said before, there are many panels that depict both the attack on Emmie, and later the punishment that is exacted on the predator they found. These panels are very graphic, and even difficult to see as a reader. However, it’s important to note that this book never comes across as offensive. Despite the brutal nature of Emmie’s mission, it is handled delicately and with care. This is the story of a girl that had all of her power taken from her at an early age, and she is learning to take it back, even if in a very nontraditional way.

Buy. Obviously, heed the warnings of the content of this book. It is going to be too disturbing for some readers. However, Emmie is a character that you instantly want to root for and her journey is compelling to watch. As a reader, this is a book that you won’t soon forget after putting it down. This series actually debuted early in 2016, but has just recently hit Comixology. Another interesting note is that it is currently in pre-production to be made into a movie.