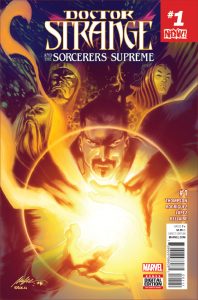 Jason Aaron has given Doctor Strange a much needed board re-certification over the past year in the main Strange book. He’s taken a character known for decades as being the exposition guy and made him a legitimate star within the Marvel line. We’re used to seeing Strange just show up and use his Cloak of Convenience to teleport the main characters or use his Eye of Exposition to explain the plot. Sometimes he’d have a sly remark referencing his supposedly exciting, off-panel life by saying “oh this reminds me of the time I fought a Chicken-Ogre in the Aetherrealm and a succubus in a Waffle House” but that was it.

Aaron changed that by using his book to describe the toll life as the Sorcerer Supreme takes on him. He shows us how using his powers to fight that Chicken-Ogre break down his body, how the horrors seen in the Aetherrealms and Waffle Houses eroded his mental state, and then uses these backdrops to highlight Strange’s strength of character for continuing to fight to protect the earth from mystical threats despite the repercussions. It’s the first time in years that Doctor Strange has ever felt like a true superhero.

Unfortunately, Doctor Strange and the Sorcerer’s Supreme doesn’t capitalize on any of this momentum. Robbie Thompson is on the script and Javier Rodriquez on art and together they set-up a typical team-book. Merlin decides to gather a bunch of Sorcerer Supremes from different time periods to fight an unknown force only known as “The Forgotten.” He drafts a young Ancient One, an older Wiccan, two new players (Nina and Kushala), Sir Isaac Newton, of course, Doctor Strange. The majority of the book then becomes dominated by all of these Sorcerers fighting some thong-wearing, wolf-Rancor, demon things and through the quipping and Merlin’s narration we set up everybody’s personality, role in the book, and drive home the fact that Merlin is somehow responsible for all the aforementioned thong-demons.

See? Basic team-up book but the art does make a play to elevate the story. Rodriquez does an above-average job of drawing Strange and Merlin but really picks it up when drawing Nina with a steam-punk vibe and the native American motifs he gives Kushala. He also shines with a splash-page right in the middle of the books that’s psychedelically wonderful but what I actually enjoyed the most was Jordie Bellaire’s colors. His color palette and shading allow each character to stand-out among the chaotic fight scenes and allow Rodriquez’s pencil details for each character to shine. Bellaire’s work here is a good reminder that you should never underestimate the colorist on your books.

Thompson’s script does it’s best to follow suit. He makes the right choice by spring-boarding off of Aaron’s characterization of Strange from the main book and keeping his current status-quo in mind. Thompson uses the set-up to craft some genuinely funny moments and it will be interesting to see how Strange interacts with the younger Ancient One and Wiccan considering his poor state of affairs. Merlin’s dialogue is also appropriately ominous and foreboding and uses him to set up Nina as the book’s chosen one. And Newton… is gonna teach us about the laws of motion…?

So the set-up’s there, but the main problem of the book is that there’s no hook. The hook is called the hook because it’s supposed to stab you and then drag your now punctured and bleeding attention to the story. It’s supposed to make you invested whether you want to or not because it lodged a weapon into your attention. But Thompson doesn’t stab. He decides to play coy and mysterious. The plot is left much too vague for me to care. Why is this happening? Why is this important? How does this effect Strange? Why is Newton here? None of these things are hinted at so why should I read #2. Instead of stabbing us, Thompson decides to punch us softly and hope he gets our attention. And at $5, this is a very costly mistake to make.

Doctor Strange: Sorcerer’s Supreme #1 doesn’t live up to the quality of the main Strange book and doesn’t justify the $4.99 price tag.  The art is great, the script has its moments, and the cast might have potential but keeping the plot just a little too vague and shrouded in mystery was a bad move. It’s a number one, there needs to be a reason to get me to come back for number two and this book fails to do that. It also adds nothing to Strange’s character renaissance and for the price, there are much better ways to satisfy your Strange itch.