“When you said you haven’t changed? Don’t.”

Who doesn’t love a good prison break? This episode featured two of them, to a degree. Lyla showed up at the end of the last episode asking Oliver to break Diggle out of military prison. Despite Felicity’s objection, not to mention Diggle wanting nothing to do with it, of course Oliver has to go and make that happen. However, he wasn’t able to get out of the city without his team of recruits standing united on the street to stop him from leaving. It hilariously didn’t work out well for them.

Of course, while the cat’s away, the mice will play. Or, more like bad stuff is always going down in Star City and it isn’t going to stop just because the Green Arrow left town. Tobias Church wreaks havoc by stealing a ton of weapons and then launching an assault on the ACU to take them out.

With Church wreaking havoc with Oliver gone, the recruits are forced to step up. Before they can truly do that, Felicity has to convince Rory to come back to the te 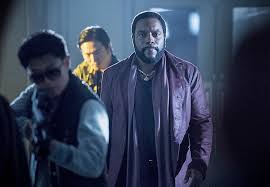 am, since he quit as a result of her role in destroying Haven Rock. It’s a good thing that he does come back, because he is a force to be reckoned with as we see his powers on full display multiple times throughout this episode.

The recruits show a lot of growth throughout this episode, and they are able to save the ACU against Church and his crew. However, Curtis ends up with a knife in his back and Wild Dog gets captured when he takes on Church one on one.

Oliver’s quest to save Diggle was a fun ride, but the satisfying parts of this part of the story came in the moments between Oliver and John. John clearly wants nothing to do with escaping, as he is serving his penance both for killing his brother and for not trusting Oliver initially, which ended up getting Laurel killed. However, Oliver convinces him that he should do that penance as Spartan, helping people. This was the heart of the episode, though having an airplane hijack them out of the prison yard was neat too.

Overall this was a solid episode. Each storyline was strong, which also included the flashbacks as Oliver passes his final test to become Bratva. The action was fun, though the choreography has taken a step back from the premiere episode. There are too many punches that are about a foot away from looking close, and that takes you out of the action. Still, this season is still projecting to be the best since season 2. Plus, the ratings this week climbed from the prior week. It actually surpassed Supernatural to reclaim its spot as the third most watched show on the CW. It remains behind The Flash and Supergirl.

“How are we supposed to get this guy to the ACU? Take an Uber?”