Supergirl has hit the week where we get Lynda Carter as the President. She once played Wonder Woman in the series that aired in the late 70’s. “Welcome to Earth” gives us more than just Lynda Carter, though. Another new addition for this week is Detective Maggie Sawyer. In the comics, she is initially part of the Metropolis Special Crimes Unit. Here, she’s a detective in National City as part of the Science Police who has an affinity for the alien population.

Last episode we saw Mon-El wake up, and this episode, we see him flee from the DEO. A good chunk of the episode is then spent realizing that he’s not the threat to the President. When she arrives, she is attacked at the airport and Supergirl saves her. Supergirl and the DEO assume it was Mon-El until Alex gets some help from Detective Sawyer. There’s a dive bar that acts as a safe haven for aliens, and one bumps into Alex on her way out. 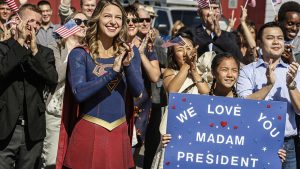 Before it’s revealed who’s behind the attack, we get some scenes with Kara as a reporter. James calls an editorial meeting, which is Snapper promptly takes over and sends Kara to talk to Lena Luthor. As it turns out, Lena is working on a device that will allow people to detect aliens. Snapper scolds Kara for her pro-alien slant in her article and she rewrites it, which pleases Lena. In the meantime, James meddles in Snapper’s story and makes his point that he is the boss and they should both stay in their lanes. It was a fun little break from all of the action in this episode. Thankfully, Kara and James are still pleasant to watch together on screen despite not being a couple any more.

Winn finds Mon-El and the DEO holds him while they figure out what to do with him. While in custody, someone attacks the President during her signing of the Alien Amnesty Act, and it turns out that it’s the alien who bumps into Alex at the bar. She goes by Scorcher, which is appropriate since she has heat vision and can throw fireballs from her fists. Once Supergirl takes care of her, she visits Mon-El to talk him that Daxam is now a wasteland. It’s a heartfelt moment for Supergirl, since she knows exactly how it feels to lose one’s world.

Supergirl has done a fantastic job with balancing the happiness of this show with the more serious moments. It really makes the show feel grounded and other than Calista Flockhart not being a regular, this show hasn’t lost much at all with it’s move to The CW. The actors have great chemistry all around and the show still knows how to dish out the surprises, like the two we get at the end of this episode.