The second episode picked up where the first episode left off with the JSA confronting the Legends. The whole “time travel” thing didn’t convince the JSA that the team was to be trusted, and a fun battle ensued. Not surprisingly, the JSA took them out behind the woodshed.

After they are escorted back to the JSA base, they are able to learn that the Legends perhaps were telling the truth, but sent them on their way. However, not before we learn that Dr. Heywood is the grandson of Commander Steel.

After learning that there was an issue with time that threatens the existence of the JSA, a 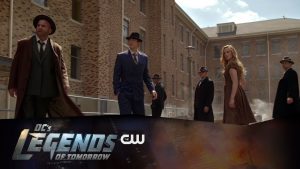 nd subsequently, Dr. Heywood’s life, they return back to 1942 to save the JSA. We also learn that the reason the JSA is in trouble due to Reverse Flash working to provide the Nazis with a super serum, which they use as a test on one Nazi that ends up being the lead monster that the teams have to take down.

This episode focused on the parallels of the two teams. The JSA is a well-oiled machine in how they operate. The Legends are a hot mess, and spend much of the episode figuring out who is going to lead them. Stein gets the first opportunity, and bungles his way through it. Eventually he decides that Sara is the much better choice. This bodes well for the show moving forward. Sara is perhaps the strongest character on the show, and having her take the mantle of leader after Rip’s demise is promising.

We also see interesting chemistry between Ray and Vixen, and he ends up having his own shining moments. This includes being able to reconstruct some of the serum that ends up saving Heywood later in the episode. Presumably, this will lead to him having some powers of his own.

Speaking of Heywood, his part in this show was much more impressive in the second episode. It seemed like he was potentially going to be an integral but boring member of this team, and this episode made him more appealing as a character.

The biggest concern with this season is how they juggle so many characters and keep the story from becoming too convoluted. Through two episodes, it has been very strong and the story has been tight. We’ll see if that continues.