The third episode of the new season embodied the title, A Matter of Trust. Primarily, this episode dealt with Oliver trusting his new team of vigilantes, but also trusting his political team. It’s a journey that Oliver has to go on to deal with the new realities of his life. Those realities now including being Mayor, but also not having his old team.

We start this episode with Green Arrow out chasing down a thug to get information regarding a new drug called Stardust. The rest of the team watched the action with Felicity back at the training facility. After getting a lead from the thug, Felicity is able to pinpoint the neighborhood that the Stardust if probably being made in. Wild Dog knows this area and tries to 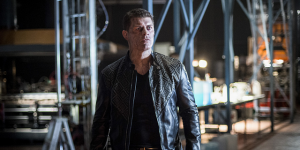 get Oliver to let them go out, but he doesn’t feel they are ready.

No surprise, Wild Dog doesn’t listen to Oliver and takes Evelyn with him to find the Stardust operation and they succeed. As they barge in to bust it up, a fight with the lead drug dealer, Garret Runnels, ensues. It ends badly as during the tussle with Wild Dog, he drops into a vat of chemicals supposedly killing him.

This leads to Oliver further distrusting the team, but the bigger issue is that Runnels of course ends up not being dead. He is now a strong freak that can’t feel pain. This character is played by Cody Rhodes, who actually is the wrestler Stardust that has an ongoing “feud” with Stephen Amell. It’s a neat addition to the show, but it’s a relatively bland hero of the week. That ends up being okay though, as the baddie of the week for this episode really is just a plot device for the progression of teams and trust within Oliver.

By the end of the episode we see Oliver learn some lessons about being a leader and trusting his team. We get to see the team suit up in their first iterations of their suits, and they are able to take down Runnels and his new c 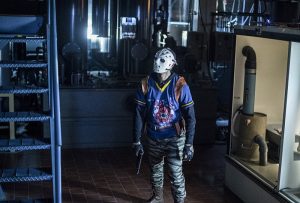 rew together. Oliver rewards his team with actually taking them to the Bunker, which is a sign of trust he had yet to show.

We also saw parallels with the growing trust of Team Arrow with the trust of his political team. Thea gets played in this episode by a reporter that ends up painting Oliver in a bad light. This is due to hiring Lance as Deputy Mayor, but when Thea tries to fix the problem, she makes it worse. Oliver ends up giving a press conference taking responsibility for the decisions made by his team, but also stands by them. We get our one shot of Lance in this episode as Oliver introduces him as Deputy Mayor.

Like the second episode, we were juggling three storylines as we also had the flashbacks as Oliver continued his journey becoming a member of Bratva. We also saw Diggle in jail. For most of the episode we saw him locked in a cell with Floyd Lawton, AKA Deadshot, whom we previously saw die. Diggle is having a difficult time dealing with himself killing his brother. When Lyla finds evidence of his framing, Diggle asks her to leave it alone.

Even though he is innocent, he feels he needs to be punished for what he did to Andy. It is in this sequence that we learn that Lawton was never in the cell with him, it was in his head. It was great having him in the episode, even if it wasn’t real. The lead into the next episode is Lyla making her way to Oliver and asking him to break Diggle out of jail. That has a lot of promise with the new team to be a lot of fun.

“I think it’s cool”. Oliver in response to Evelyn who questioned what kind of vigilante would where a hockey mask. It was a nice wink that they had to do.