Like the main Star Wars title and many of the mini-series that came with Marvel’s re-entry into the franchise last year, Darth Vader is set after the first Death Star’s destruction. The emperor, displeased with this failure, demotes his apprentice. The series shows Vader’s attempt to regain favor with the Empire as he battles rivals for power. All the while, he seeks information on a certain X-Wing pilot. And along the way, Vader enlists help from a clever archaeologist, Doctor Aphra, and her two killer droids. 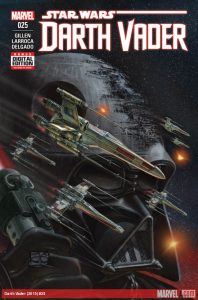 Issue #25, the last in the series, brings everything to a close. Vader’s power struggle comes to an end as he confronts the last of his rivals. He learns where he stands with the Emperor, and we find out what happens to Aphra. While all of this was somewhat satisfying, it also felt like an aftertaste following the climactic nature of issue #23. And did Marvel need to make this $5.99 for 46-pages? I don’t think so. The wordless 10-page coda felt like an unneeded extra.

The highlights of the issue reflect the strengths of the series as a whole. The dialogue in the final battle is vintage Darth Vader: sparse but cutting and revelatory. Through the whole 25-issue run, writer Kieron Gillen has proven a master of capturing the Darth Vader from the movies. To do so, he envelopes Vader in a shroud of dark reticence. This contrasts with the other characters, who do most of the talking (with mixed results for their well-being). The words coming from Vader are sparse, and the glimpses of emotional depth are rare but poignant.

There is an impressive use of the Force and a visually stunning two-page spread in this issue that fit right in with the rest of the book. Artist Salvador Larroca’s portrayal of everything in this series, from the epically dynamic (light-saber duels on the surface of a star destroyer and starship battles with space whales) to the quietly impressive (the opening panels of the series show Vader entering Jabba’s palace) is a treat. Like Gillen’s writing, Larocca’s art captures the look and feel of the original movies in a way that is just delightful for Star Wars fans.

Through twenty-five issues, the creative team tells a defined story about Vader’s quest to regain his rightful position in the Empire. The series is filled with scenes sure to please devoted Star Wars fans, as the creators skillfully balance Vader’s known past and future while maintaining a feeling of suspense and narrative pay-offs. It’s always sad when a quality series ends, but it feels right that this one has come to a close: Darth Vader, after all, is not one to be strung along.

Verdict: Check out this issue; buy the series. Regular readers will want to know how it ends, though the final issue falls short of the climax in previous ones. If you haven’t read this series before, start at the beginning. And hurry: Darth Vader is waiting.