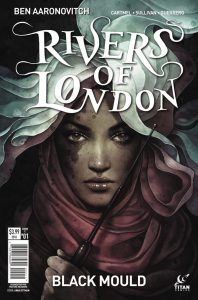 As a favor to a family friend, DC Sahra Guleed checks out a house abandoned by their university-student daughter, only to find what chased her out was a mold… er, mould problem. The kind of mould that forms into hands and attacks her, chases her out of the house, and slams the door. Sahra knows what she has to do: contact PC Peter Grant, the only apprentice wizard in the London Metropolitan Police.

Rivers of London is an urban fantasy book series by Ben Aaronovitch that chronicles the magical adventures of Peter Grant, a biracial London police officer who barely avoids being doomed to the Case Progression Unit (where he’d be stuck behind a desk doing paperwork) when he’s recruited by DI Thomas Nightingale, the last living fully-accredited wizard in London. Together, they form a division of the police whose specialty is magic, which is alive and well despite popular opinion. And, as Peter has learned, magic is nothing like it is in Harry Potter.

During the interval between the fifth (Foxglove Summer) and sixth (The Hanging Tree) books of the series, Aaronovitch teamed up with Andrew Cartmel and Lee Sullivan to produce a few miniseries of comics: Body Work (referenced in this first issue), Night Witches, and now Black Mould. These miniseries, while not furthering the main plot, help develop the characters that don’t get a lot of “screen time” in the novels.

This comic features one of those secondary characters, Sahra Guleed, who introduces herself in the second novel Moon Over Soho as a “Muslim ninja” during the raid of an evil wizard’s lair. Guleed has become in the books the de facto liaison between the murder investigation team and the Folly (Grant’s and Nightingale’s division), but she hasn’t had a chance to shine in the novels yet. She’s taking a much more active role in the comics, with a full-on action scene where she fights off anthropomorphic mould with her extendable police baton. It’s so rare that we see a dark-skinned Muslim woman take such an active point of view roll in a narrative outside of Ms. Marvel, and she does it while keep a wry sense of humor in the wake of Peter’s more ridiculous statements.

I’ve focused mostly on the series as a whole because this comic series is part of a larger series, yet the comic can be read on its own: all you need to know is that it’s about the London police, and both Peter and Nightingale are magical police officers. This issue is a strong beginning to the series, showing Peter and Sahra successfully fighting off a magical mould infestation, only to learn that there’s a mould infestation in multi-story apartment complex. The story is full of action, but the best part is that magic itself doesn’t really solve their problems. Peter is learning magic, but he also uses science (fighting the mould with vinegar) and common sense (hiring a civilian exterminator). This is what separates Rivers of London from a lot of urban fantasy: magic is cool, but the real world still exists and sometimes science and common sense solves problems better than a fireball.

In the meantime, in a callback to the first comic series Body Work, Nightingale teams up with a mechanic to fight a possessed ice cream truck. Honestly, if that doesn’t hook you, I don’t know what will.

Sullivan’s art in this comic is very strong. The action sequences are done very well, but I think the strongest part of this comic is the facial expressions. All the characters are really expressive, which breaks up the exposition-heavy dialogue scenes. Many times, panels and facial expressions are used to convey the story sans dialogue. Given that Aaronovitch is a novelist primarily, it shows that he’s allowing Cartmel and Sullivan to make this into a comic, and not just a novel with illustrations.

All of the Rivers of London comics include backmatter: usually a few pages of background into the history or geography of the work, and a one-page joke comic at the end. This comic includes write-ups of various London landmarks and settings that are featured in the novel series, with historical context, characters’ thoughts, and snark. And the comic is very funny, again mostly using the art to tell the joke.

Buy it now and get addicted to this series. Even if you don’t start reading the novels, the comic series is good enough to stand on its own.