“You have to decide if you want to be someone else. Something else.”

The premiere episode of Arrow was one of the best episodes we have seen from the show in a long time. Okay, there were episodes in the last couple of seasons that were probably better. However, the premiere of this season was a hopeful glimpse of what this fifth season could bring. A return to better times if you will. The premiere was about as perfect as it could have been, small quibbles aside. The question is, will the season deliver on that opening glimpse?

The primary theme of the second episode revolves around Oliver’s decision to listen to Felicity and begin recruiting a new team. We start with seeing Green Arrow save Wild Dog from a brutal fall as he was chasing down a random thug. After an entertaining exchange, Arrow leaves him with an invitation. An actual paper invitation with a time and address. It seemed like a prom invite, and it was amusing. That actually served as the end of the actual recruiting that we tend to see in other team-up shows or movies like we saw in Suicide Squad. Instead, we jump right into training. The initial recruits are made up of Curtis, Rene Ramirez (Wild Dog), and Evelyn Sharp. We saw Sharp at the end of the previous season dressed as Black Canary, and the assumption here is that she will eventually take on that mantle again.

The training itself is a combination of entertaining, hilarious, and cringe worthy. In pure Oliver fashion, his primary tactic in beginning to train this group is to have them try and get past him and ring a bell behind him. He proceeds to just brutally kick their ass. Over and over again. For a guy that can inspire and lead with the best of them, he has some pretty terrible leadership skills at times. It should also be noted that Oliver refused to show the new recruits his identity and was set on wearing his mask, though against the wishes of Felicity. 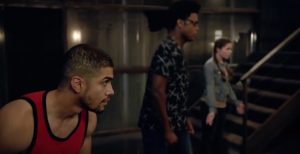 Meanwhile, as mayor, Oliver has met with the president of a company called AmerTek regarding funding for a free medical clinic. Shortly after this meeting, we see what is presumed to be the bad guy of the week kill one of the higher ranking members of this company. This character, at first look, resembles the Scarecrow. With arm tentacles. It was kinda terrible and kinda great, at the same time.

With a high-ranking member of AmerTek being killed, it was decided by the CEO that they should no longer hold the event. Oliver assures her that he would personally see to increased security. When Felicity finds footage that shows that the murdered AmerTek employee was killed by something that looks to be a Meta, she convinces Oliver that the new recruits should help with the security of the event. This was after yet another round of training that included many more brutal beatings.

When the event comes around, with the new Team Arrow helping with security with specific instructions to stay low and not engage under any circumstance, it takes mere seconds before fake Scarecrow attacks. It should be noted here that the baddie got into the event through an entrance that Lance was supposed to be guarding. He was both extremely late, and drunk. Green Arrow conveniently arrives quickly when the attack happens, but Wild Dog did Wild Dog like things as he also jumped in the fray and went after wannabe Scarecrow. Of course, he got away, but Wild Dog did get a piece of his rags.

As a result of the team, or really just Wild Dog, not following orders, Oliver proceeded to rip the team a new one. This was bad Oliver at his worst. He was insulting and downright mean to each and every one of them. Felicity then did what Felicity does, and lectured Oliver on why he was an idiot. In scene not long after, we see Curtis give a lecture to Oliver as well. This was a great moment in the show for Curtis. It was impassioned and full of heart. His basic message was that he was a terrible leader that doesn’t build people u
p, he tears them down. Evelyn and Rene quit the team, and Curtis followed suit.

These events sink in for Oliver, and we see him come to the realization that he was a bad leader. He wasn’t wearing a mask not to protect the recruits, but rather to protect himself. He is still dealing with the reality that the old team, the old family, isn’t coming back. That loss hu 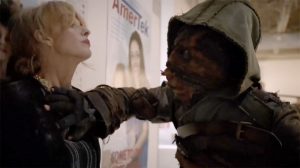 rt him, and he is genuinely afraid to let others in again. Felicity does a great job of pointing out that each one of the old team respected and followed Oliver, not Green Arrow.

Eventually, we get back to the issue at hand and see the AmerTek CEO selling weapons to Tobias Church. When Arrow arrives, so does Ragman, as the team has come to call him. We come to the realization that Ragman wasn’t the bad guy. He is a guy wanting revenge as AmerTek played a major role in the bombings that happened last season. While Ragman was going after the CEO, we get a fun battle between Church and Green Arrow. Church actually gets the better of Oliver, and Ragman lets the CEO go to save Oliver. We then learn further how Ragman came to be, and that his dad wrapped him in mystical garbs before the explosions and it saved him, while also allowing him to have abilities. Oliver convinces him to join his team and honor his father vs. being consumed by vengeance.

We end with Oliver meeting with the other three recruits. He reveals himself to the team to be Oliver Queen, and in his own special way apologizes. He shows the level of trust in them that he needs them to have in him. Granted, this act got the team to change their mind in insanely quick fashion, but oh well. The journey that we saw in this episode with the recruits was mostly a lot of fun to watch, with certain spurts of cringing. There is a lot of potential to see how this team comes together.

One of the other surprises came back to Lance. Despite being late and drunk, and despite Oliver thinking that he needs time away before getting responsibility, Thea offers him the opportunity to be Deputy Mayor. If he can sober up, it makes sense. Thea explains that a former police captain whose daughter gave her life defending the city makes a lot of sense. It seemed like this purpose was something Lance was going to respond well too. This is an exciting turn of events that hopefully works out well.

One of the difficult parts of this episode was that it tried to juggle too much. We have the flashbacks back to Oliver’s time in Russia as he works to become Bratva. These scenes related closely to the main story with the recruits. However, we also had a third storyline with Diggle in the military. The long and short being that he was leading an Op and ended up by the end of the episode being tied up and potentially framed for stealing a weapon of mass destruction. It was great that we got some Diggle, however trying to fit in two side stories into this episode was a bit much.

So, did this episode live up to the premiere? It wasn’t as good as the first episode, but that was going to be a difficult episode to live up to anyway. The juggling of three story lines was a mistake that disrupted the rhythm. It was also difficult to see Oliver be such a bad leader during parts of this. That being said, we end with this team in a good spot. They have set up what could be a really fun journey going forward if they do it right.

Additionally, the Felicity and Oliver dynamic was again on point with the way it works best. They are a team, they are there for each other, and they have an appropriate chemistry that is better when it isn’t romantic. There were a few warning signs in this episode, but more reason than not for optimism as we continue to move forward.

“They could say the same thing about you.” Felicity to Oliver when Oliver said the team was too green. It was a delightfully Felicity moment that was missing too much from last season, when she was an emotional mess.