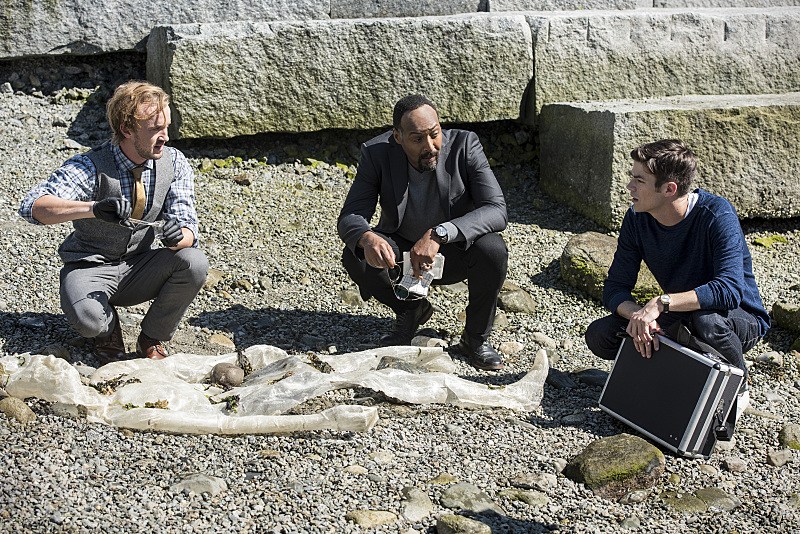 This week’s episode of The Flash brings us a whole new timeline yet again. While it’s not too different in the big picture of things, each character has been affected personally in different ways. When Barry realizes this, her runs over to Felicity to talk it out. It’s been a while since these two have been on screen together and it was as pleasant as ever. We do see that it has affected Arrow, though, even if ever so slightly. Baby Sara is now a baby boy and that’s the only real difference Barry can notice over there.

Central City has some new territory, or in this case, a character for Barry to adjust to. Julian Albert, played by Tom Felton, is a Meta-Human CSI Specialist who is sharing the lab with Barry. He quickly becomes aware that he and Julian don’t get along, but he finds it hard to grasp the idea of a while new person to figure out. Another major change is that Dante is dead in this timeline and Cisco is upset that Barry refuses to go back and change his brother. While by the end of the episode, he understands why Barry can’t, it’s still hard to see Cisco in that much pain.

On to the big bads for the week. Rival, aka Edward Clariss, is given his powers from the alternate Flashpoint timeline by Alchemy (later Doctor Alchemy per Cisco’s nickname). Rival confronts the Flash and Iris becomes aware the two know each other. This ultimately leads to Barry confessing about Flashpoint. Later, Rival and Alchemy both go after the Flash, but Cisco comes to give Barry a hand and they’re able to put him in Iron Heights. As we find out to end the episode, he doesn’t stay there for long.

Before Barry confesses about Flashpoint, he tries to go back again to fix things. Jay Garrick, the doppelgänger of his dad, pulls him out of the speed force to tell him that he can’t do this again. Barry returns and confesses to the team and they try to figure out if they want to know about their former lives. The team decides against that, but does decide to work more as a team. We also get a little look at the Killer Frost side of Caitlin that no one else is aware of.

The episode closes out with Doctor Alchemy getting to Rival in Iron Heights, but right before that, the porch kiss with Barry and Iris is recreated. While it is a little cheesy to redo it in the same exact way, it works. Things won’t be exactly the same, but this is as close as it’s going to get for Barry.

Flashpoints (you can all thank Joey for this idea):