Champions #1 is the statement  Marvel will make following the catastrophic events that Civil War II is unfolding. Heading the cause is Ms. Marvel after observing the aftermath of a battle with The Wrecking Crew and not agreeing with the way public needs were handled. She’s frustrated with the apathy the Avengers have towards the destruction they leave behind the battles they fight. So, she quits the Avengers and instead of giving up superheroing altogether  decides to start her own team.

Ramos, Olazaba, and Delgado’s combined efforts visually pop and add color to the world that the 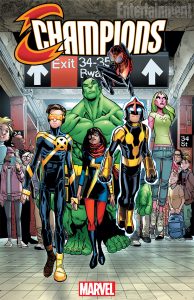 Champions left. A world where actions had consequences that aren’t managed well and indirectly. Ms. Marvel, Spiderman, and Nova aid Amadeus Cho’s Hulk in a mine collapse that has trapped three people.  Now, they don’t just fight your usual villain, they deal with real world problems and use their powers to set the status quo back when they’re done. Particularly, fixing the mine shaft they destroyed further in order to save those trapped.

The art team create dense imagery in the face of action and utilize each superheroes power to create dynamic action scenes. Also, the team understands when to pull back when Waid decides to have humorous moments with facial expressions indicative of the characters. When the door opens at Vision’s home, the art team takes time to have a comedic beat right before enlisting Viv Vision.

From there, they find another case that deals with human trafficking. An issue that disgusts the team and forces them to face their combined philosophy. Hulk relentlessly fights the criminal in charge of the human trafficking, along with the rest of the team, before being stopped by Ms. Marvel. The man is arrested because the Champions mean to fight the systemic problems facing the world and how superheroes handle them.

“We have to start enforcing justice without unjust force.” The thesis of Ms. Marvel’s video recorded statement is a call to those who are new to the superhero way of things. They flash panels of Ironheart, Moon Girl and Devil Dinosaur, Cyclops, and others while making the statement to help 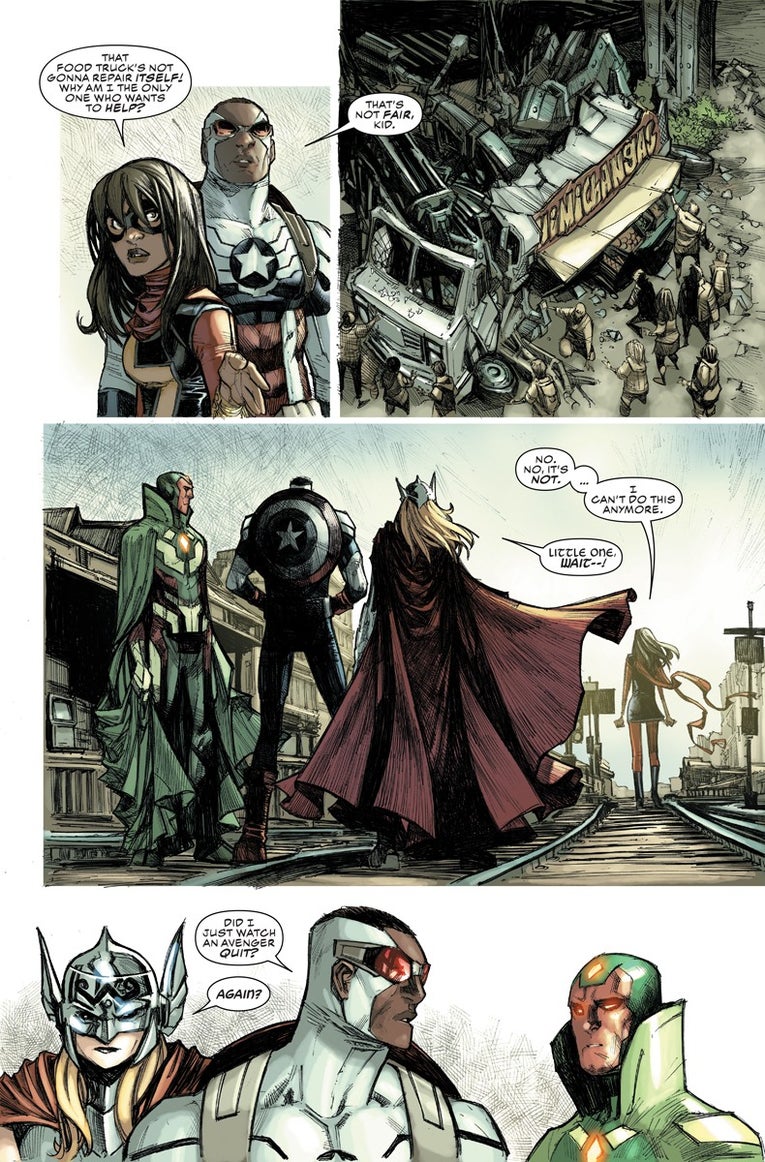 “them become Champions.” They’ve started a movement that they’ll have to uphold by sticking to
their core philosophy of trying to be better than the superheroes that preceded them.

Waid uses the Champions youthful optimism to thread a tale of empathy of the world these superheroes inhabit. They aren’t fighting for themselves or some colossal group of people you only engage with in crowd shots surrounding a superhero. They concern themselves with the plight of the people and they are more than a means to an  end of some greater evil. They’re meant to inspire hope and set an example for their super powered elders. These are superheroes for a new generation clearly evident in the team getting its own hashtag on Twitter along with the support of the people.

Buy! Even if you haven’t read up on Civil War II or know these characters well enough, the team’s approach to emphasizing each personality is done well. You know the archetypes and this team is going to try to break those down. Waid is no stranger to the superhero comic and his body of work will inform how he handles this series. If you ever hear him in interviews, he fleshes out superhero conventions and meticulously understands them. Let alone, Ramos, Olazaba, and Delgado’s beautiful art enriching the story with lush coloring and dynamic action. The writing and art team are here to play with the nature of superhero stories by being conscientious of the world they inhabit.