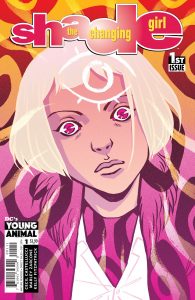 DC’s Young Animal sends us madness in the form of its new book out this week with Shade the Changing Girl #1 by Cecil Castellucci and Marley Zarcone. The original Rac Shade was a Steve Ditko creation that ran for a brief time and was then rolled into the DC universe. While there our dimension hopping hero served with the Suicide Squad and just six months after his last appearance Shade became apart of the british invasion. Shade the Changing Man by Peter Milligan and Chris Bachalo came out under the Vertigo line and like Hellblazer at the time the series took place in the darkest corners of the DC universe and was controversial. It was also full of beautiful psychedelic imagery and twisted stories.

When starting a series that has a twist on an original idea or character it often means that there’s going to be some letting go of what came before. This is more inviting and a way to ensure new readers that they haven’t missed anything. But the team on Shade the Changing Girl drops us straight into the madness and it’s as mad as ever. This first issue sets up conflicts across dimensions and gives the reader a window into the life of the girl who was once Megan. Her body is now inhabited by a citizen of Meta named Loma. Who is inspired by and looks up to Rac Shade. So much so she puts on his cote and crosses dimensions. Parts of the book feel like a teen drama with elements that can only be found in places like Pretty Little liars and I Know What You did Last Summer. Those elements and ideas are Infused with intense imagery and strange storytelling that is at times only achievable in comics.

For instance when Loma (in Megan’s body) pukes the rainbow colors of Shades cote and those colors then become her bed sheets. Things like that are what will set this art team apart of others working in comics right now. Marley Zarcone draws creatures from metta, animals of earth and insane psychedelic sequences. All of that is aptly colored by Kelly Fitzpatrick together the two of them render beautiful, fun and interesting pages. In the course of reading the issue there will be a creepy or horrifying thing that pops up. Things like this keep the reader on there toes and on the lookout for strange happnings. Even Saida Temofonte (the letterer) gets to have some fun when it seems like loma in Megan’s body may be speaking in another language. Everything that can be seen in this issue is different and it’s so much fun to see insane images brought to life on a page in innovative ways.

Cecil Castellucci uses what little characters say and the way they say it to dramatic effect. no one stops to spew expository dialogue or explain things to death. Aspects of the story are left open so that they can unfold as the series moves forward. Castellucci leaves really good food for thought throughout the issue, Questions like did Megan’s parents want her to wake up? Was what happened an accident? Who is the kinda creepy neighbor boy with a telescope? All these questions and more will hopefully get answers as people read on. The teen drama aspect to the story are already meshing with the dramatic irony of the reader knowing that Megan is not who everyone is worried she is. This alone with all of the other crazy cosmic happnings would make for an interesting story. Here however it is just one part of a much larger idea.

Before closing up it’s worth mentioning that the creative team for this book is all women and that’s pretty awesome. Because there’s always room for more amazing stories regardless of who they’re made by but especially when they help bring diversity to the industry.

Verdict Buy. This is repurposing of a concept in the best way. The story pays homage to its roots while going in its own new and innovative direction. There is drama and fantastical goings on that will no doubt have readers coming back for more when issue two hits shelves.