“The shark that does not swim, drowns.”

When we last left the Arrow Cave at the end of Season 4, it was a pretty lonely place. The team has disbanded, with both Thea and Diggle leaving the team. Felicity was still there, but Olicity had been killed. Oliver himself was sworn in as Mayor of Star City.

As we pick thi 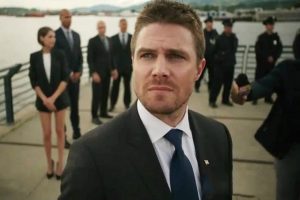 ngs back up in the first episode of Season 5, we see Oliver struggling to be the Mayor he wanted to be last season. He’s also struggling to keep the city safe without the rest of Team Arrow. In fact, in the opening act we see Green Arrow taking down a number of thugs and shutting down a bomb, but at the expense of being late to a police function he was to attend as Mayor. It’s worthy to note that while accomplishing this feat, he comes across an amateur vigilante in a hockey mask that the team later refers to as “Wild Dog”. During that encounter, Oliver put an arrow in him as a warning to stop interfering.

Luckily, Thea was at the police function where she has adapted from campaign manager to playing a major role in Oliver’s attempt to run the city. When Oliver does make it to the function, he gives brief comments regarding what he describes as “widespread corruption” in the department. In a following conversation between Oliver and Thea, we learn that Oliver isn’t exactly loved as Mayor. His approval ratings are in the toilet. In Season 4, we saw Oliver want to be Mayor so that he could exact the kind of change that he couldn’t as Green Arrow. We see that his current philosophy has changed. He clearly doesn’t think he can be a good Mayor, but it puts him in a position to be better at being Green Arrow.

It doesn’t take us long to figure out that Oliver was right about the corruption in the police department, as we see a number of dirty cops take out a number of thugs in order to take over their operation. It’s at this point that we meet one of this season’s antagonists, Tobias Church. Church rolls in with his crew and they promptly kill the cops, who killed the initial bad guys. Lots of dead people, with Church being a man on the rise. Church is well played by Chad Coleman, who played Tyreese on The Walking Dead.

As some detectives scan the crime scene of the preceding events, an eavesdropping Green Arrow got wind that Quentin Lance was back in town. Last we saw Lance, you had the sense that he wasn’t headed for a good place after the death of Laurel. When Oliver went to go see him, we see that Lance is definitely not in a good place. He is no longer with Donna, and is an ugly drunk with nothing to live for. Oliver offers him a place on Team Arrow, which no one seems to want, including Lance. All he wants to do is empty some bottles. Oliver does let him kn 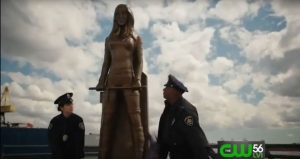 ow that the city was having a ceremony to unveil a statue of Laurel as Black Canary and that he should come.

When the ceremony comes, Lance comes as well. We see Oliver unveil the statue after giving a moving speech about what she meant to the city and that the city needed to stay united. We get some great shots of Lance with a clear mixture of pain and pride. Of course, no ceremony can go unencumbered, as Church and his crew show up and kidnap Oliver. Their goal is to lure out the Green Arrow.

Despite not ever wanting to suit up again as she has found a place of peace being a normal person, Thea decides to don the Speedy suit again to save her brother after Lance convinces her that after Oliver’s speech he realizes he has to move on. When Speedy arrives, she witnesses a great scene of Oliver taking out one of his captives. However, taking him out literally meant snapping his neck. They are able to escape, though without other council members that were also kidnapped. Witnessing Oliver kill did not sit well with Thea, and she is further emboldened to not put on the Speedy suit again.

Meanwhile, this continues to only further convince Felicity that they need to be recruiting and building a new team. She sends Curtis out to scout out Wild Dog, and see if he is someone that they should be recruiting. She then continues to argue with Oliver about building a team and also reminds Ollie of the promise that he made to Laurel. Finally we get to see what the dying wish of Laurel was for Oliver, and that was that he was to always make sure that there was a Canary. That way a piece of her would always be out there with him.

In the name of everyone realizing they need to move forward, Lance brings Oliver a folder of police officers that he knows can be trusted. These officers make up a team that Oliver agrees to help him free the council members from Church, with Lance helping direct traffic from the Arrow Cave with Felicitiy. In the process of saving the hostages, Green Arrow narrowly escapes an exploding building and had an exciting helicopter fight with Church and some of his goons. Church got away, ensuring that more fun is on the way later in the season.

To wrap up the episode, Mayor Queen ends up appointing an Anti-Crime Unit that reports directly to him made up of the officers that Lance recommended that helped free the hostages. We also see Church again working to unite various gangs and mobs of Star City under his command.

Finally, we come back to the formation of a new team. We see Oliver have a conversation with Diggle, who has reenlisted in the military. When asked if he should start a new team, Diggle says he should, and that he needs to move on. We then get to see Curtis weigh in on the subject, as he was a victim of assault while he was trying to find Wild Dog. He not only wants Wild Dog to be recruited, but he wants to be recruited himself.

And in the spirit of moving on, we see a shot of Felicity with a new boyfriend, one of the detectives on the force. Moving forward is the theme of this episode. We also have an opportunity to see a menacing new figure that looks to potentially be the Big Bad of this season. His name is Prometheus, and there is a lot of potential there. 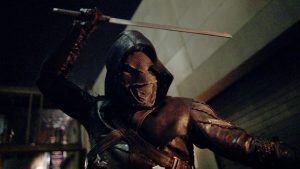 Overall, this was an excellent premiere episode. The last two seasons have seen the quality drop significantly. This season we have been promised a return to what made this show good, and that is street level villains. We also have, for now, no more Olicity.  This episode proved that the show is better without Olicity. The dynamic of Felicity and Oliver was back to being what it once was. They also brought a new energy and focus to the fight scenes. It was much more crisp and exciting than they have been recently. Even the flashbacks were entertaining. Oliver’s infiltration into the Russian mob with Anatoly by his side promises to be a fun ride.

This show doesn’t need to be The Flash. It doesn’t have to be the fun, carefree ride that show is. In fact, it shouldn’t. But it doesn’t need to be a weepy, drama filled mess either. It can be gritty and a little dark while still being inspiring and fun. This episode showed that is possible, and hopefully that is what we will see for the whole season.

“I have it on pretty good authority that he is tied up right now.” Oliver Queen to Tobias Church, on why Green Arrow isn’t coming to the rescue. Har Har Har.