Sometimes you run across a storyline that really doesn’t make sense. Or, perhaps it does, but it doesn’t fit in the box that you want to put it in. For example, Batman/Teenage Mutant Ninja Turtles by James Tynion IV was a crossover that largely made no sense. How could Batman and then the Teenage Mutant Ninja Turtles fit in the same comic? That’s ludicrous! Well, actually, it was a ton of fun and not everything has to fit into that nice little box that we want it to be in. That sums up He-Man/Thundercats #1.

Here’s the gist. Mumm-Ra, the classic Thundercats villain once again has been defeated and he cowers back to the Ancient Spirits of Evil with his tail between his legs. They have clearly grown tired of his failures and have issued him one final chance to defeat the Thundercats. They have become aware of a powerful sword that is even more powerful than Lion-O’s Sword of Omens. That sword happens to be The Sword of Power, which is He-Man’s sword. One problem, that is on another planet in another universe. No worries, lets squish the planets together until they become one? Listen, don’t think that hard about it or try to make sense of it. Just roll with it. 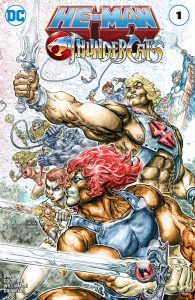 From there, things get interesting and we see where this thing is actually going. Despite needing to set up what this story was going to be about and having to explain the logistics of how that is even possible, fans of both He-Man and the Thundercats have a lot to get excited about. You see a plethora of characters that were big in the cartoons and are going to play a role in this book. There is also a twist at the end that pays off pretty well and will no doubt excite nostalgia-seekers.

Is the writing and plot great? Well, let’s say this. It would fit in with the cartoons of the ‘80’s very well. It is what it should be. The same can be said for the art. It’s enjoyable to look at but can look corny at times. But, it also has the feel of the cartoons.

Check it out.  If you ever were a fan of these shows/toys in the ‘80’s, then you have to check this out. It will provide you with a trip down memory lane that is well worth the $3.99 price tag. If you weren’t familiar with these properties, then pass. It’s the nostalgia that provides the biggest payoff.