Civil War II isn’t even over & Marvel is already rolling out their next event, the Death of X. This book is intended to fill the readers in on the tragic events that occurred between the X-men and the Inhumans. Death of X is set during the gap in time between Secret Wars and the launch of the All New Marvel Now and is meant to answer the question of what happened to ‘old’ Cyclops. The last we saw of ‘old’ Cyclops was his Phoenix inhabited body being destroyed by the hands of God Emperor Doom in the pages of Secret Wars. Since then he has been noticeably absent from the current X-universe titles. If you’ve been reading the X-Books we’ve heard rumblings of something catostrophic that he did. Now the question of what that was is going to be answered in Death of X and it will lead into the next event, IVX.

The book opens with the Uncanny X-Men responding to a call for help from Muir Island, home to Moria MacTaggert and her mutant research facility. As the blackbird descends we see that the island is engulfed in a mist, which is not unusual for the northern isles but the reader knows what it really is. The Terrigen Mist released by Black Bolt at the end of Infinity has come to Muir Island with tragic results. As Cyclops and his team investigate the island they start to fall ill as they begin to encounter the horrors of what happens to Mutants when exposed to the mist. Long time X-Universe readers are going to be saddened by these event and every reader should have empathy for the horrific effect the mist can have on a mutant.

While the Uncanny X-Men are on Muir Island the book jumps to Crystal and her Inhuman team hovering over Japan in the RIV as the Terrigen Mist is moving toward a major metropolitan area. The team is prepared to offer assistance if any new Inhumans develop. Of course this is easier said then done, especially when a cadre of Hydra soldiers are on scene to steal the Inhuman cocoons to study them. Crystal and her team respond in force. Mayhem ensues and eventually aid comes from a powerful new ally.

The book seamlessly jumps back and forth between these two situations. The best thing about the two storylines is the raw emotions conveyed to the reader. With the X-men there is a sense of dread and doom while the Inhumans are bright and hopeful. The artwork is a huge help with these emotions as the X-Men scenes are dark and gloomy with a lot of heavy shadows. The Inhumans are bright and warm, so much so that their scenes feel like a beautiful spring day. By the end of the book the course of action is clear for both races as they are compelled to protect their future. One sees the dawn of a new day while the other feels Darwin creeping up on them.

It was very smart of Marvel to put Jeff Lemire and Charles Soule together on this title. Lemire is the current scribe of Extraordinary X-Men while Soule has been guiding the Inhumans for the past few years and currently writes the Uncanny Inhumans. The characters voices ring true and under these two wonderful writers this book was very entertaining. Aaron Kuder was a brilliant choice for this mini-series. His artwork reminds me of Frank Quitley but with his own distinct style. I enjoyed what he did on Action Comics for DC and if this is any sign of what is to come then the future is bright. I also have to give Morry Hollowell credit for how beautiful this book was. The colors are perfect for the emotions the reader is supposed to feel and it was wonderfully rendered.

Verdict: Buy this book. If you’ve lost interest in Marvel’s other events or have event fatigue this book may bring you back into the fold. It is atmospheric and moody but in a nice way. Jeff Lemire and Charles Soule are two exceptional writers and Aaron Kuder is and excellent artist. Jump on at the beginning of this new event. 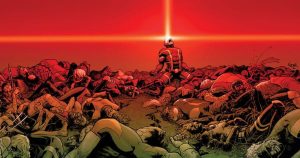