Story and letters by Mia Goodwin 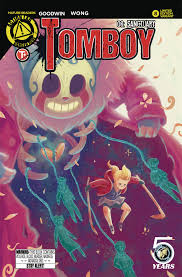 Art and colours by Michelle Wong

When I was fourteen, my school had an archery club. This club didn’t last long, probably because of an incident where someone missed the target so badly they scraped the person standing next to them with the arrow. This issue doesn’t miss the mark by that much (you have to try pretty hard to do that), but by the previous issue standards it doesn’t quite hit the excellence that this series usually attains.

This issue focuses primarily on the investigation of the murders; we see the police slowly piecing it together. Goodwin does a good job of re-treading the past events, making this a nice recap for new readers, whilst not making it a hardship for others. However, I feel like this issue loses something because of its shift in focus away from Addison and what was a crazy last page reveal in the last issue; this is further ingrained as the second half of the comic, where Addison shows up, feels like this is where it hits its stride.

Goodwin follows up on the poignant emotional beats from previous issues and, whilst she has the great violent pages that Wong excels at drawing,  the best moment of the comic is Addison just having a conversation about Jessica. Goodwin makes Addison more than just a vengeful vigilante (she even uses one liners), but a layered character so that when the violence happens you care, even if she goes to game of thrones level killing.

Wong’s art has just enough detail to make you really feel for the characters, capturing the environment and emotions. However, it is sparse enough that your focus is on the story going on instead of hidden layers of meaning in the background.

This issue compared to the rest of the series is a slight step down as, for me, the shift in focus didn’t quite work. However, this issue is , compared to most books out there, still a stellar book, with great character work that will only build in the hopefully years of issues to come.

BUY. Even for an issue that slightly misses the mark it has one of the best scenes of the series. Goodwin uses this issue to build every character’s personality and this series is the one series I recommend everyone get, especially with the second volume coming out next week.