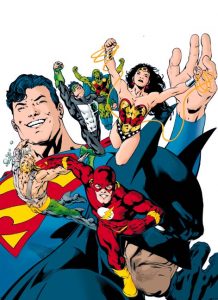 It could have been epic. It should have been historic. It had every ingredient a great comic run needed. Mark Waid was a top-notch writer, at the top of his game. The next component was a stellar artist with jaw dropping art. No one was doing it better in 2000 than Bryan Hitch. When it was announced that this dynamic duo was replacing Grant Morrison and Howard Porter on DC’s flagship title, JLA, I was pumped. Of course, I was sad to see Morrison and Porter leave. They had resurrected one of my favorite titles and their run was both revolutionary and ambitious. But, they had run their course and I can always respect a writer or artist when they decide to leave a title. Plus, I wasn’t concerned when it was announced that the team replacing them would be none other than Mark Waid and Bryan Hitch. If anyone could top the Morrison-Porter run, it was these two titans in the industry.

By 2000, Mark Waid had established himself as one of the best writers in comics. If ever there was someone born to write comics, it is Mark Waid. His love for the medium is abundantly apparent as his deep knowledge of comic history lends itself to his story telling. He’d already floored me with his long run on the Flash. He’d had me crying, laughing with Impulse and he completely blew me away with Kingdom Come. He was a force to be reckoned with and had already done some wonderful things with the JLA, most notably the Midsummer’s Nightmare that had led directly into Morrison’s run as well as JLA Year One with his frequent collaborator Barry Kitson. Both had me wanting more JLA from Waid and I was happy when he was announced as the new writer.

Bryan Hitch is one of my all time favorite artists. The first year of the Authority and the Ultimates (volume 1 & 2) are all in my top ten of greatest comic books runs. His realistic, hyper detailed art has always appealed to me and even though I was devastated to hear he and Warren Ellis would not be continuing with the Authority after issue #12, I was quickly relieved with the news that Hitch would be joining Waid on the JLA. I couldn’t wait for their run to begin. I had no idea how disappointed I would be.

Morrison left with issue #41 and after a fill-in issue, Mark Waid took over with #43 and began his Tower of Babel storyline (#43-46), where Ra’s Al Ghul systematically took out each member of the league. The League at this point was the seven-member pantheon plus Plastic Man. We would later learn that Ra’s Al Ghul’s was in fact using Batman’s own doomsday plans in case any of the League went bad. This storyline ostracized Batman from the Justice League, creating a storyline that would run through most of Waid’s run. Howard Porter stayed on the book for these issues and to give Hitch a head start, although Hitch’s art is incredible, he also works at a slow pace. This arc is without a doubt Waid’s strongest of his short run and is a must read for any Justice League of America fan.

DC decided that the first Waid and Hitch JLA would not be in the series, but rather as a treasury-sized special, JLA: Heaven’s Ladder. It was a gorgeous story of the Earth being stolen by aliens as the experiment with many worlds in the hopes of finding a suitable habitat for their afterlife. The JLA, of course, springs into action and with the larger pages Bryan Hitch’s artwork never looked better. This book alone had me salivating for what was to come. I could not wait for issue #47 to hit the shelves.

The Waid/Hitch era seemed cursed from the outset. Hitch took so long on Heaven’s Ladder that he quickly fell behind on the main title. Remember, I told you he was very slow. Issues #47-50 are the Queen of Fables storyline, where fairies come to life, redesign Manhattan, and Wonder Woman falls under a Sleeping Beauty style spell only to be awakened by the kiss of a king, which the JLA happens to have in Aquaman. It was an interesting subplot after that, as Waid seemed to be laying the groundwork for Wonder Woman and Aquaman to become a couple. Both being royals seemed to be the only link they needed. It didn’t work well. Hitch only drew issue #47 then a few pages in the next 3 issues.

By the end of issue #50 Batman decided along with Superman that to get past the secrets from the Tower of Babel they would reveal their secret identities to the rest of the League (Mainly Just Kyle & Plastic Man since everyone else knew them already). The cliffhanger was when Bruce Wayne reveals himself to the League, Batman arrives in the Bat Cave and over the course of the next three issues the heroes with secret identities are split from their superhero identities. As Bruce Wayne becomes the playboy he always portrayed, Batman becomes a more violent vigilante of the night. Clark Kent becomes a clumsy buffoon, while Superman becomes more alien. Hitch penciled more of the pages during this storyline and Waid wrote Plastic Man as a badass. Since he was a criminal before becoming a hero, he was the most interested of the team to get back to their original status quo. The White Martians from the first four issues of the Morrison run return in issue #55 but the wheels were coming off the rails by this point.

Hitch quit with issue #55 as he and Waid had a falling out over the direction of the book. Waid walked away after #60. Obviously, both Waid and Hitch have continued to be top tier creators. Waid did amazing things with Superman Birthright and then after a stint with the now defunct CrossGen, he returned with great runs on Legion of Superheroes, Fantastic Four, Daredevil and is currently making me love Archie, a book I never liked before. Hitch went on to the Ultimates and Ultimates 2, then the Fantastic Four with frequent collaborator Mark Millar and has now returned to the JLA with his pre rebirth stint as writer and artist that was delayed again and again and is now just writing the Rebirth Justice League book. As the years have passed, I’ve enjoyed what both of these men have done but I will always wish that their JLA had been the epic run it should have been.