Confessions of a College Kingpin #1 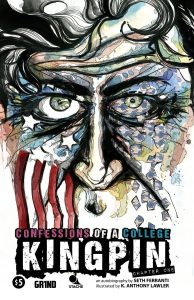 Comic books tend to take on many different forms. Stories about superheroes are obviously very common. Adventuring kids, imaginary worlds, fantasy lands, and a lot of capes. What you don’t tend to see is a comic book that is a true story and an autobiography of sorts. You especially don’t expect to see that same story revolve around a college kid that descended deep into the world of drugs and partying. It’s the author’s story of how and why he became a drug dealer and went from a kid that just wanted to party to being on the Top 15 Most Wanted List.

We get the first part of this story in Confessions of a College Kingpin #1 by Seth Ferranti. The readers get a glimpse of what could be Seth’s fate in the early pages seeing that he clearly gets to a point where he is strongly considering suicide. We then rewind back to a few years prior where we begin with Seth’s story. We get to follow Seth starting in high school and eventually on to college and how he ended up on his path. That’s what this first issue is though, it’s a table setter. We have the tip of the iceberg and that is intriguing in its own right.

The art is something that is equal parts fascinating and frustrating. It’s frustrating because it is done in multiple rainbow-esque hues that make it very difficult to follow. In many ways it is distracting and takes away from the story. However, the hues do also lend to the tone of this book. This is an autobiography of a character that lived his life in a haze. The art, while distracting, is a perfect representative of how the character was living his life.

Wait and See. As is the case with many first issues, this book is just the tip of the iceberg of where this story is going to go. It’s plausible that this book will be digested easier in trade format. With that being said, this is a story that feels like is going to be a wild ride. It’s also very unique in that it is an autobiography which puts the reader in a completely new headspace that is worthy.